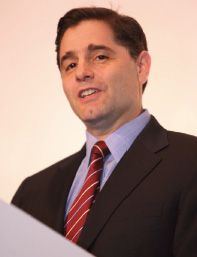 FCC Chairman Julius Genachowski
Around 400 people quickly packed a Las Vegas Hilton ballroom at 7:30 in the morning to hear what the point-man on spectrum reassignment had to say.

He was genial and relaxed in front of a crowd that was, if not openly oppugnant, at least skeptical of the chairman's proposal to redesignate broadcast spectrum for broadband. Genachowski cut directly to the subject of the incentive auctions the FCC intends to use to gather spectrum space for reassignment. Under the inventive auction model, broadcasters who relinquish part of their allocated spectrum would share in the auction proceeds.

"One of the most important tools the FCC needs is the ability to conduct voluntary incentive auctions," he said. "This idea has strong momentum."

Congressional authorization is required for such auctions, and bills are pending in the House and the Senate. If authorization is obtained, Genachowski pledged to work closely with broadcasters on implementation.

He said that while there would be legitimate issues to address, some of the arguments against the auctions amount to distractions.

"Some have argued there's no spectrum crunch, but the data couldn't be clearer," he said. "There's no big swath of spectrum hidden in a warehouse somewhere."

Broadcast interests have alleged as much—that cable and satellite companies are warehousing spectrum. Genachowski said the licensing system requires those who win spectrum to build it out.

"Some have argued incentive auctions will stop Mobile DTV. It will not," he said. "Even if 120 MHz of the 294 allocated for broadcasting were freed up as a result of an incentive auction, a healthy and robust broadcast system would remain, and nothing would change the terms and use of a 6 MHz channel, including Mobile DTV."

As for broadcasters who elect not to participate in the auctions, they would be compensated for the cost of moving to new channels. They would not, however, be guaranteed the right to stay on a channel.

"This would not only be unprecedented, it would give any one broadcaster veto power over the success of the auction," he said.

He reasoned that there would be minimal service disruptions for consumers because the DTV transition allowed stations to move to new frequencies without changing virtual channels.

Genachowski said he would be "straight and fair and focused on problem-solving" going forward. "I ask the same of you."