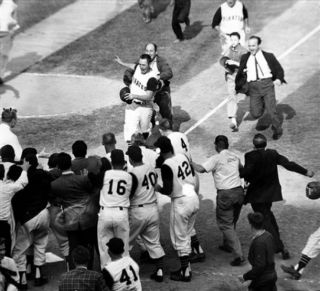 NEW YORK and PARIS: The gem found in Bing Crosby’s wine cellar last December has been polished. The film record of Game 7 of the 1960 World Series, when the Pittsburgh Pirates edged out the New York Yankees with Bill Mazeroski's ninth-inning home run has been restored. That’s according to French vendor Technicolor, which today said it assisted Major League Baseball’s MLB Network with the restoration. Technicolor said it provided restoration and sound remastering of the 16mm film commissioned by Crosby, a part owner of the Pirates.

The original broadcast of the game will be televised Dec. 15 on MLB Network at 8 p.m. ET. It will be the first time the game will be seen on television since it was played more than 50 years ago. Crosby was said to be so nervous about the game he and his wife went to Paris and listened to it on the radio, The New York Timessaid.

Technicolor said it applied “more than 100,000 individual fixes to remove dirt and other scratches and address other visual anomalies” in the 50-year old kinescope source film. The audio team faced particular challenges.

The game was recorded before field and direction microphones were regularly employed, so the audio was captured entirely from the announcers’ mics.

“This presented a unique challenge, as many effects--even the crack of the bat--were difficult to hear. Technicolor enhanced the audio to capture the full spectrum of frequencies, bringing out as much of the stadium environment as possible and allowing even the softest effects to be heard,” the company said.

The two-and-a-half hour source film accidentally was discovered in Crosby’s house by an executive for Bing Crosby Enterprises, the Times said.