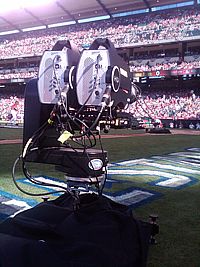 Using twin SprintCam Vvs HD systems with a PACE 3-D rig, Fletcher's crew delivered a head-to-toe shot of the batter striking the ball. At 1,000 fps and in 3-D, every detail was presented with stunning vividness—even down to compression and deformation of the bat and ball as they made contact.

"It was the shot everyone talked about—the 'wow' shot, and people could not believe that 3-D could be delivered at 1,000 fps," said Dan Grainge, vice president, Fletcher Chicago Inc. "To see the ball compress and the bat bend and feel that they are so close you could be hit by them—that created a huge buzz, and viewers were really taken aback by what they saw."

In addition to the Home Run Derby, Fletcher Sports has a full schedule of upcoming sports events to cover using the I-MOVIX SprintCam Vvs HD system, including NHL, NBA, MLB, and NFL telecasts later this year.

"We are very excited to be using the I-MOVIX solution," added Grainge. "I-MOVIX has made a complete package based on single-chip, high-speed cameras. The system makes operation of extreme slow motion familiar to anyone in the broadcast industry, and it incorporates a hand-held camera body with integrated viewfinder, tally and intercom, all running down a single SMPTE fiber to a CCU in the truck. These developments increase reliability and picture quality while greatly reducing setup and training."

The Phantom-powered SprintCam Vvs HD operates at frame rates up to 2,700 fps in 1080i50 or up to 5,800 fps in 720p60 (up to 100 times slower than live action), and provides instant replay at native HD resolution and image quality.

Specially designed for live broadcast use, SprintCam Vvs HD can be specified in a standard camera version or optimized for shoulder-mounted portable shooting. Some of the new features include a dual output to allow a camera operator to shoot and record at the same time, segmented memory, a replay vary-speed function, and integration of both live- and replay-view on the viewfinder.

"SNY was the first network in the U.S. to utilize the I-MOVIX ultra-slow-motion camera system from Fletcher," said Curt Gowdy, Jr., senior vice president and executive producer for SNY. "This camera truly brings dynamic visuals that catch the viewer's eye immediately with stunning clarity and a variable selection of high-speed slow motion, and also serves as an excellent educational tool that complements our announcer's analysis from the booth."