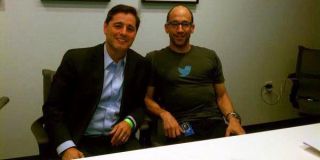 SAN FRANCISCO: Federal Communications Commission Chairman Julius Genachowski today signed on from Twitter headquarters to answer questions from the public under the hashtag, #AskJulius. The chairman opened with “Delighted to be here at Twitter HQ for chat til 11 pst/2pm est – Julius.”

He then mentioned remembering 9/11 “victims and heroes. My brother was one of many who saw people jump & Fall. We honor all who have suffered – Julius.”

And then he was gone. Questions poured in while the chairman remained silent.

Cecilia Kang, reporter for The Washington Post, tweeted “Maybe my techfail, but am I missing something on #AskJulius chat? No answers yet. Feels like a press conference with no speaker. Pls help.”

Brett Glass said Genachowski was tweeting, but omitting his own hashtag, “so users aren’t seeing responses.”

“Headline so far?” Shaun Dakin wrote. “It took the @FCC account 23 minutes before they used their own hashtag for the chat @Ask Julius. Winning.”

Followers then scrambled to find out where Genachowski’s responses were.

The chairman’s replies were finally discovered on the FCC’s Twitter account. The first question he fielded from dozens in a queue was from Sen. Marco Rubio (R-Fla.), asking what the FCC is doing to “preserve Internet freedom at the World Conference on International Telecommunications.”

Genachowski, architect of the FCC’s Net Neutrality rules, told Rubio that “net freedom” was “vital for innovators and speakers. Day 1 priority of mine.”

Alex Howard go through the gatekeepers with a question about which iPad app the chairman favored. That would be Major League Baseball’s “At Bat.”

Rural Broadband was next with a query about when Connect America Funds would become available for non-incumbent Internet providers.

“Coming soon, w/ first in the world Mobility Fun auction on 9/27 to extend 4G to rural USA,” the chairman tweeted, shortening himself to“– JG.”

Adam Thierer, researcher at the Mercatus Center at George Mason University, asked about the “80-year history of regulatory capture & cronyism at the FCC.”

The signature and even the initials had disappeared by this time.

From Lisa Kay: “When will something be done to end predatory phone rates? Hurting the community of vulnerable and poor populations.”

Engine got through with a query about how the FCC would provide spectrum for start-ups.

Unanswered questions piled up behind the FCC’s query screen.

“Can you do anything about robocalls that won't hang up and can block you from calling 911 for duration of their spiel?” J.A.B.Z. asked.

“Unlicensed spectrum getting cluttered; unusable for broadband in many areas. When will there be more?” Brett Glass asked.

“Ninety percent of the state prison phone market is controlled by 3 companies. Will the FCC act?” asked Peter Wagner of the Prison Policy Initiative, whose question appeared to be attributed to Lisa Kay.

“Mr. Chairman, why has the FCC not established a unified standard for cellular communications as it did for broadcast?” Warm Southern Breeze asked.

“Why has the spectrum auction Allotment Optimization Model for repacking TV stations in 40 percent less spectrum not been provided?” asked TVBroadcast.

An hour or so into the chat Colin Crowell, head of global public policy for Twitter, posted a picture of the chairman with Twitter CEO Dick Costolo. It was followed by a sign-off, presumably from Genachowski directed at Costolo.

“Thx for all the Qs. Love to Rachel and kids Jake, Lilah, Aaron. Go @Kenyon Football.”