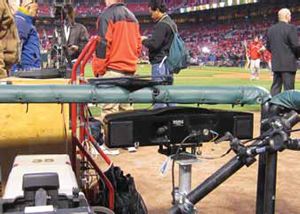 A DigiMax 3D-4U camera on the field for the 2011 World Series. The orange cable on the rear panel is a Gepco fiber.

ALEXANDRIA, VA.: When it comes to moving camera signals around a large venue for high-quality video production, there are two popular technologies: cable and fiber. Cable, especially in the form of triaxial cable, has been around for several decades and is still widely used today.

There are a couple of big advantages to fiber as compared to triax (or coax) cable. First, signals can travel further on fiber without amplification. If you need to get HD-SDI from two cameras on the 18th hole of the Masters and the production truck is 1,000 yards away, this is not a problem for fiber.

Second, signals traveling on fiber are impervious to induced hum and interference. You can run the cables through a power substation, and they will neither conduct electricity nor pick up any hum.

The two big downsides of fiber as compared to triax are that fiber is typically harder to connectorize in the field and since fiber can’t conduct electricity— cameras and other acquisition gear must have their own local sources of power. Also, when fiber first arrived on the scene, it was nearly impossible to support bidirectional signals on a single fiber.

Copper cable remains the choice if the location where you want to place the camera can support only one cable and there is no local power. For other applications, manufacturers of fiber connectivity products have developed solutions to those initial fiber shortcomings, and now fiber is increasingly used to carry high-quality signals for network-level live production.

One example is the CommLink from Telecast Fiber Systems. “CommLink is the first full-duplex intercom-over-fiber solution,” said Ed Miley, senior sales engineer for Telecast. “There are other products that make use of a few pieces of equipment and fiber, but none are a full-fiber solution.

“As more productions move to riding on fiber between the venue and a mobile unit or mobile unit to transmission, the need to extend intercom exists,” Miley continued. “The CommLink can connect any remote intercom belt pack or panel back to the matrix and keep everyone on the system without having to run dedicated copper audio cables to remote locations.”

Miley said that NBC used as many as five sets of the CommLink at Superbowl XLVI in Feburary to handle the extensive intercom requirements at the stadium, compound and surrounding offsite venues.

SHARING SIGNALS
As productions grow more complex, big events now often need more than one mobile truck to handle live events. Fiber is ideal for sharing signals among production trucks, as it eliminates the possibility of hum that might otherwise cause fits with audio and video signals.

The Multidyne FS-6000 Fiber Saver can take either six digital optical signals (up to 4.25 Gbps each) or six uncompressed HD video signals (up to 3 Gbps) or a mix of both and seemlessly multiplex them onto a single fiber using coarse wavelength division multiplexing (CWDM).

The Telecast CommLink provides two-way video, audio and intercom on a single fiber.

“Today’s OB vans often have one or more ‘B-units’ that exchange multiple signals with the main truck,” said Joe Commare, vice president of marketing and business development for Multidyne. “This has historically been done with heavy coax looms, but a few Fiber Savers can save a substantial amount of weight in not having to carry these coax looms from show to show. All that weight savings could be used to carry other revenuegenerating pieces of gear, such as more recording devices or specialty camera systems.”

Space in production trucks has always tight, and any product that occupies a smaller footprint and can reduce power demand and heat load has a good chance of being noticed. Such is the case for the Nevion Flashlink 3GHD-EO-2/3GHDOE-2 dual 3GHD fiber converters, which have integrated distribution amplifiers on both the EO and OE modules in order to reduce the need for external distribution amplifiers.

“The electronic design of the modules is based on the ultra-low power consumption philosophy of Flashlink, resulting in reduced carbon footprint and operating cost, as well as improved reliability,” said Svein Håvard Haugen, director of engineering for Nevion. “All those are critically important factors in liveevent applications.”

At the London 2012 Olympic Games, the European Broadcasting Union (EBU) is using the 3GHD-EO-2/3GHD-OE-2 fiber converters as part of a Flashlink system to connect the TV Tower, an area overlooking the Olympic Stadium where broadcasters have cameras, and the IBC, where the EBU will aggregate all the signals coming from different venues.

ON THE FIELD
Down on the field where big league games are played, fiber is now the preferred method of connecting to cameras. For the 2011 World Series, DigiMax Productions used a 3D-4U camera to capture the action in both 3D and at variable camera angles.

“3D-4U’s first generation camera utilized copper connectivity, which limited the maximum distance that the camera could be setup away from its image server,” said Troy Senkiewicz, CEO of DigiMax. “The copper solution [also] weighed nearly 500 pounds and was expensive to ship.”

DigiMax worked with 3D-4U to implement a fiber solution, with sporting venues and production trucks as the primary focus.

“In addition to providing tactical cable and all fiber terminations, Gepco delivered a solution that transported 20 video, audio and control signals over a single strand of fiber,” Senkiewicz said. “3D-4U World Series.

PATCHING AND ROUTING
With the increasing popularity of fiber, a reliable solution for patching fiber circuits has long been a goal. Fiber connectors and patch points have a reputation for being fragile and subject to damage, and efforts to clean/repair connectors often made the problem worse.

Winchester Electronics recently developed the EL-Series fiber-optic video jack, which the company says can be used as simply and reliably as a traditional copper patch jack.

“The Expanded Light (EL) series expanded beam technology gives broadcast users the familiar look and feel of a copper video jack, but with all the advantages of optical fiber,” said Jerome Farnan, director of advanced optical fiber for Winchester Electronics. “Normally there is a tradeoff when implementing optical fiber where you sacrifice the ruggedness of copper connections for the increased bandwidth fiber offers, but the EL-series [gives you] all the increased bandwidth without having to worry about cleaning the fiber connectors, without exercising great care to avoid scratching the ferrules, and not being concerned about bending or breaking the fiber.”

The Winchester EL-Series is being used at the London 2012 Olympics by a U.S. broadcaster.

Other than patch panels, a purely optical method of routing optical signals remains elusive. However, some companies have taken electronic matrix routers and outfitted them with optical input and output modules, with the result being a router that can electronically switch optical signals.

One such company is Thinklogical, which has fiber routers that range from 16x16 all the way to 576x576. The top of the line HDX576 router is signal agnostic, and will route anything from NTSC and PAL video to 3G and dual-link HD-SDI signals.

Sometimes, all you need to do is provide a high-quality image at a distance, whether it is in the next building or down the road. IHSE makes a variety of fiber products, including its Draco Extender Compact that can feed a 2K signal to a monitor up to 10 km away. The Draco Extender Compact also has USB keyboard and mouse ports so that you can control the source computer.

Another way to get more out of your existing cabling network is to compress the signals to occupy less bandwidth, while maintaining the signal’s high quality. That’s what the T-VIPS TVG430 HD JPEG2000 Gateway does, and it can be used with a variety of network topologies to deliver broadcast quality images with frame-by-frame accuracy in considerably less bandwidth than HD-SDI.

“TVG430s are installed in every Major League Baseball stadium [30 total] in North America,” said Steve Sloane, director of sales for T-VIPS America. “Every time there is a home run boundary call by a team manager, there is an instant replay and review of the video by the umpire. The T-VIPS TVG 430 codecs are used to transmit the video to the umpire from the league’s Replay Operating Center in New York City.”

Doing live broadcasts of major events requires a level of reliability and performance that is a cut above all other broadcast operations. The relatively quick adoption of fiber to connect cameras and interconnect facilties shows that manufacturers have been diligent about improving the performance and usability of fiber.