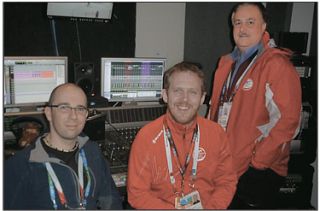 LOS ANGELES
The 2010 Winter Olympics, held in Vancouver, British Columbia in February, were the first Winter Games for which the host broadcaster provided broadcast rights holders with fulltime 5.1 audio. Michael Nunan and Joshua Tidsbury of CTV, two principal members of Canada's Olympic Broadcast Media Consortium, sat down with TV Technology in advance of the recent AES show in which they lead a seminar discussing how they, in turn, undertook to deliver that material uninterrupted to their viewers.

(L to R) Josh Tidsbury, Michael Nunan and David Midgley (Senior Post Sound Mixer) in CTV’s Post Sound Suite at the International Broadcast Center in Vancouver. This was a mammoth undertaking: 2,450 hours of programming over 17 days, delivered via 12 TV channels and 20 radio stations in 22 languages. It employed over 1,400 people working in seven production control rooms and six studios, supported by 21 edit suites and more than 30 editors, in addition to graphics, animation and other craft suites. "This all comes on the back of a colossal multi-year effort by a staggering number of people," said Nunan, CTV's post sound supervisor. Nunan wore many hats during the lead up to and duration of the Games.

EVERY PIECE OF AUDIO HAD TO BE 5.1

At the Games, the host broadcaster, Olympic Broadcasting Services Vancouver, developed the world feed and distributed it equally to all of the rights holders. Adding a layer of complexity to that 5.1 feed, every original piece of material introduced by CTV for its broadcast was also 5.1, according to Nunan. "Every time we ran an animation or a transition effect, a piece of music, a feature story on an athlete, every one of those elements was discrete 5.1."

That was unusual, he said, even for Olympic coverage. "From an engineering point of view the challenge was how to preserve that 5.1 through all of the various crenellations in the distribution and production and transmission path. Highlight editors, people doing instant replays, production editors doing craft editing—everyone, right through the food chain—needed to have equal and common access to the material and have it be immediately usable."

Adding to the challenge, the main network was on-air from Vancouver for 21 hours on many days, said Nunan, "That leaves you precious little downtime. Those of us who were involved in the training and the workflow and the process design took it as [a given] that they were going to be the things that made the difference."

During the year leading up to the games, CTV's operations and engineering team assembled the infrastructure in a giant warehouse close to CTV's Toronto headquarters. "That was because it needed to be built, and because a lot of things needed to be invented and sorted out," Nunan said.

Then came training. "Each operations group in their turn came through the warehouse and were trained not just on the specific technology but—as near as we could manage it in that kind of strange environment—on the workflow," he said.

But while many operators were simply learning the specifics of a piece of equipment with which they were already generally familiar—for example, an audio mixer learning the operation of one of the Lawo consoles deployed at the event—some training needed to go deeper. "Many of them were being introduced to 5.1 for the first time," Nunan said. "So in addition to needing to give them an academic understanding of what they were dealing with and teaching them what it was supposed to sound like, we also needed to explore and we collectively needed to figure out what the workflow was going to look like."

One key component of CTV's original material was the Olympic Suite, nearly 250 music cues co-produced by Nunan and Tidsbury in-house at CTV in discrete 5.1, which, according to Nunan was essentially a theme and variations based on the anthem, a song entitled "I Believe," for Canada's Games. The suite was recorded at Montreal's McGill University and at the Masonic Temple, a CTV facility in Toronto that is also home to MTV Live, as well as various commercial studios, then edited and mixed at CTV.

"Everything being 5.1 extended all the way back to informing where we put microphones on the stage when we were recording the symphony," Nunan said. "It was real 5.1; we weren't upmixing anything, we weren't synthesizing anything."

"These were live ensembles, real space, and very natural," added Joshua Tidsbury, a systems specialist at CTV and, like Nunan, an audio mixer during the Games. "The decision to approach the music that way probably made a very large difference in terms of the ability for the broadcast to fold down cleanly later. I would argue that the stereo and mono subscribers benefited equally from the quality upfront."

Tidsbury emphasized the importance of the Olympic Suite. "It was one of the largest investments," he said. "It was pretty unprecedented in terms of any broadcaster to the Olympics."

The final piece of the puzzle, observed Nunan, was the ability of the equipment to handle 5.1. "For instance, all of our craft editorial was undertaken using Avid Media Composers. They don't natively speak 5.1. There are clever ways that you can cajole them into doing it, but they don't do it easily."

However, he noted, "While an Avid can't make 5.1, it can happily pass it, as long as you have a very clear understanding of how you are going to conduct yourself regarding monitoring, and how tightly you can enforce a kind of editorial discipline in terms of, for instance, how editors put what material on what track."

Fundamental to the workflow was that all of the editors observe an audio "Hippocratic Oath," explained Nunan: "First do no harm. The lynchpin to that was providing every editor with 5.1 monitoring. You're in an environment where failure isn't an option and you want to give the editor the best opportunity to understand that he's maybe made a mistake before it's too late."

In the lead-up to Vancouver, said Nunan, "There were moments when it wasn't a foregone conclusion that we would be 100 percent end-to-end 5.1." But, he concluded, "It was worth leaning into the strike zone to see if it wasn't possible to give Canadians an experience of the Games in a way that they had never been done before."