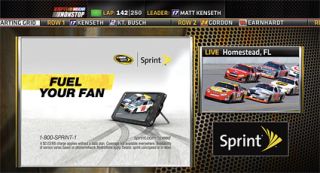 "Often things happen while we are in a commercial block," says Rich Feinberg, ESPN's vice president of Motorsports production. "Our people recap what happened as soon as they come back, but it's not the same thing as seeing the action live."

"NASCAR has the most dedicated and loyal fans in the world, and we are constantly trying to enhance how those fans consume this great sport," said Paul Brooks, president of NASCAR Media Group. "ESPN's 'NonStop' format will ensure our fans maximize their viewing experience during the most intense and thrilling time of the season—the Chase for the NASCAR Sprint Cup." NASCAR NonStop will premiere on Sept. 18 with a NASCAR race at the Chicagoland Speedway.

The network first experimented with split screen commercials during the 2005 IndyCar races. TNT tried spilt screen during the 2007 Firecracker 400 NASCAR race. More recently, the format was tried by FOX during its Sunday, May 15 NASCAR broadcast. However, apparent advertiser resistance has kept split screen ads from becoming a staple of motor racing coverage. As a result, ESPN's NASCAR NonStop represents the biggest commitment to split screen advertising to date.

Technically speaking, creating ESPN NonStop is not a big challenge. "We have been able to use all of our existing equipment at our Master Control in Bristol, Connecticut," Feinberg says. "It is a bit tricky bringing in the live feed, and then integrating it with the second window using commercials played from our server— plus adding the sports ticker—but it is within our existing capabilities."

Instead, the real challenge for ESPN has been winning support for the concept from its NASCAR sponsors. One can see cause for concern: The NASCAR NonStop model gives viewers a chance to keep watching the race, rather than the commercials that sponsors have paid for.

Rich Feinberg won't say if ESPN cut any special deals with its sponsors to keep them happy. "That's something that was handled by sales," he explains. "But it is fair to say that we offered our sponsors enhanced value in exchange for agreeing to our split screen approach. We wouldn't be going ahead with this now if they weren't onboard with the concept—and they are."

There are actually compelling reasons for sponsors to back the NASCAR NonStop dual window model. First, by keeping the race video running in a smaller window, this model motivates viewers not to clip to other channels during breaks: After all, they could miss something if they do.

Second, "NASCAR viewers are very brand loyal, and appreciative of those companies who support the sport," Feinberg tells TV Technology. "They will take note of the sponsors taking part in NASCAR NonStop, who are making sure that not a single second of race action is being lost. They will remember those advertisers who cared enough to keep the video rolling, even during commercial breaks."

At press time, ESPN had created the templates and graphics for NASCAR NonStop, and had tested them in real-time at its Bristol Master Control. "The process was quite successful," says Feinburg. "Everything worked as planned."

That said, the NASCAR NonStop process has yet to be tried using a mix of live NASCAR and recorded commercial content. ESPN will run such a test prior to the Chase for the NASCAR Sprint Cup broadcasts. "We will choose a race and run the system in-house on a closed-circuit feed," he says. "This should help us iron out the bugs."

If everything goes to plan, the split screen model should keep race fans and sponsors happy—and eyeballs tuned to ESPN.

"Since we returned to NASCAR racing in 2007, one of the most common questions from our fans has been, 'why don't you do the commercials side-by-side?'" says John Skipper, ESPN's executive vice president of content. "We're very pleased to do it now with NASCAR NonStop and showcase the advertiser while still showcasing the race."