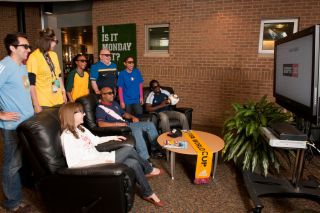 NEW YORK: People remember TV ads better in 3D than in 2D. That was one finding from the most extensive 3DTV viewer study yet, conducted by ESPN during the summer’s 2010 World Cup soccer tournament. ESPN used Disney’s Media and Ad Lab in Austin to measure viewer response to its inaugural 3D coverage. It was, for the most part, favorable.

“We don’t know how much of this is due to the novelty of the 3D experience,” said lead researcher Dr. Duane Varan, executive director of the Interactive Research Institute and the inaugural chair of New Media at Murdoch University in Perth, Australia. “We tried to get around that with 2D... but we won’t know the answer to that for a while.”

ESPN conducted 1,000 testing sessions comprising 2,700 lab hours over a five-day period, comparing the responses to traditional 2D television with 3D. Five different brands of 3DTV sets were used, and three display types: Plasma, LCD and a DLP. Some subjects watched a full game, half in 2D and half in 3D. Others watched three full games in a single day, exposing them to 3D viewing for 4.5 hours. Still others watched just one full game in 3D daily for each of the five days.

Among other results, ESPN found that cued recall of ads increased from 68 percent in 2D to 83 percent in 3D. Purchase intent went from 49 to 83 percent. Ad “liking” went from 67 to 83 percent. Just four ads appeared in the 3D World Cup coverage, Varan said, and only two were comparable in both 2D and 3D, so those were used. One was from Gillette; the other, from “Toy Story 3.” The 3D ads were considered more effective, “all things being equal.”

The programming itself also receiver higher marks in 3D than 2D. “Enjoyment” increased from 65 to 70 percent; “involvement,” from 67 to 70 percent; and “presence,” from 42 to 69 percent. Other key findings included:

-- Response was more favorable to native 3D than converted 3D.
-- There was little difference perceived in the use of passive-versus-active glasses, though the passive glasses were considered “more comfortable and less distracting.”
-- No adverse effect on depth perception (stereopsis) was reported.

“We found no statistically significant adverse effects for stereopsis over a five-day period,” Varan said, though eyestrain and headaches were reported. These improved over time, indicating a tendency toward acclimation. Varan stressed that this was true over the course of five days rather than for those who watched 4.5 hours of 3D. That group reported a rise in headaches and eyestrain, both of which were relieved by taking breaks, he said.

ESPN revealed the results of its research in New York today, amid reports that the 3D channel was in financial jeopardy and in danger of being pulled. ESPN’s Bryan Burns told TVB otherwise on Tuesday (“Reports of ESPN’s Demise are Premature”), and reiterated same today.

“We have affiliate deals that go beyond June 2011,” he said, when Sony’s sole sponsorship of ESPN 3D is set to end. “We have revenue and income coming in from the advertising and affiliate side.”
-- Deborah D. McAdams