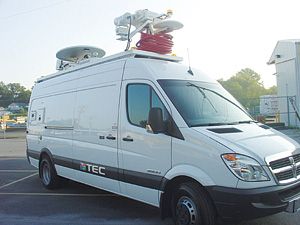 SEATTLE If space, weight and fuel economy were never a concern (and if money grew on trees), every ENG van would have the production capabilities of a 44-foot expandable remote van.

But in the real world, there's no real broadcast industry consensus on whether to put a small production switcher and other production equipment into news remote vehicles. Some do it; some don't.

"A long time ago we had them," said Sterling Davis, vice president of engineering for Cox Broadcasting in Atlanta. "But it's not anything we currently do." Davis did point out that Cox's WTOV-TV in Steubenville, Ohio, still has such a vehicle, which not only does its workaday news duties, but is used for local sports production.

Craig Harper, vice president of technology for Belo Corp. in Dallas concurs with Davis. "The one's [with production capabilities] that we've built in the past were at our largest stations," he said. "At KHOU in Houston we had a production switcher in our satellite truck, but we took it out because it was not getting used."

St. Louis-based TEC's custom build out of WMC's (Memphis, Tenn.) multipurpose ENG, DSNG & Production Spinter. Harper said that the station found the day-to-day usage they got out of such production capability was small. "…we need all the real estate in the van, especially with the conversion to digital microwave, there's more equipment onboard the van." The company's larger stations have full production vans they can roll out for multi-camera news event coverage.

Raycom Media's WMC-TV Memphis Chief Engineer David Evans does have a small switcher in the station's satellite news truck. He said the station uses it for news specials, such as last fall's presidential debate from the University of Mississippi in Oxford.

The Sprinter van has a 1 M/E SD switcher and simple audio console. "It's for transitions between multiple cameras on remote sites," he said. "We don't do any graphics out of the truck."

North of the border, the Canadian Broadcasting Corp. has made a major commitment to production-enabled news vehicles. The company has 18 such vans spread across its CBC stations.

"We build those trucks configured slightly differently, depending on which market we put them in," said Dave Greenway, engineer-in-charge of mobiles for CBC's news department. "Generally we don't build more than one per market that has production capability, except in Toronto, which is Canada's largest broadcast market."

"We use them for a variety of things," such as the swearing in of new governments and Premier's conferences. Like WMC, the CBC doesn't put graphics in from the news vehicle. "…generally our on-air presentation studios will insert the graphics just prior to going to the on-air switcher," he said.

"It's not as common as it used to be," said Thomas Jennings, director of broadcast sales at Wolf Coach in Ayer, Mass. "ENG vans are strictly that these days, they're acquisition vehicles and very few people are doing production out of those vehicles."

The interior of CBC's new Sprinter DSNG van includes a compact switcher, among other production items. Rex Reed, director of business production development for E-N-G Mobile Systems in Concord, Calif., said it's not necessarily a case that stations don't want production capabilities built-in. "It's often asked for, but seldom within the budget…the production equipment often gets kicked out, and they end up with a simple news truck."

He said the real eye-opener, cost-wise, is the price of a digital production switcher that is either HD or capable of upgrading to HD.

"I'd say half of them have some level of production switcher in them," Crockett said. "It may be just two or three camera, that's about what you can support from these trucks."

In fact, Brad Gleason, director of new vehicle sales at Television Engineering Corp. in St. Louis, said that "double-duty" capability, versus a "news-only" van, may be a selling point for some stations trying to justify a new vehicle to their ownership.

"One of the things I think some stations will do in order to justify the expense of these larger Sprinter-type vehicles," Gleason said, "is to make sure they have production capabilities, so that they can use that to multipurpose the vehicle. It's an easier sell-through than if you have just a news vehicle."

Those that have production-enabled news vehicles generally still only have one to a station. The general direction news departments seem to be heading is to very simple live-shot vehicles.

"Our goal is to get people in these ENG trucks into smaller vehicles which are cost-effective to operate and environmentally friendly," said Mike Doback, vice president of engineering for Scripps Television Station Group in Cincinnati. He said he sees the new COFDM transmitters, "with the little antenna on the side of the car that you can flip up" as a solution for many close-in live shots.

He said those minimal live-news vehicles won't totally replace the traditional ENG van. "You're still going to have a need for that 40-mile live shot where you need a 60-foot mast, there's no other way to do that with terrestrial microwave," he said. "But I think for a sizeable percentage of the fleet, we're going to see a whole new paradigm."