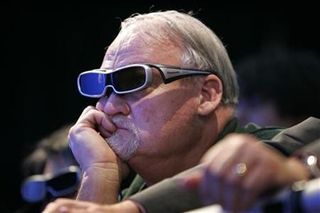 “Based on this forecast, 3D TV market penetration is expected to grow from a 5 percent share of total flat panel TVs in 2010 to 37 percent in 2014,” DisplaySearch said in its latest quarterly report.

“TV manufacturers have managed to launch products very rapidly,” Paul Gray of DisplaySearch said. “We have seen a full range of 3DTVs in sizes from 40- to 63-inches already available, and without a doubt, there will be another wave of new products at the IFA show in Berlin in September.”

Only Samsung and Panasonic launched 3DTVs during the first half of 2010, DisplaySearch’s Paul Gagnon said.

“Based on early indications, the launch of 3DTVs is similar to Samsung’s rollout of LED LCD TVs at the beginning of 2009, albeit at a slightly slower pace,” Gagnon said. “This would be in line with our forecast of just over 2 million 3DTVs shipped in North America for 2010.”

The 2 million forecast is in line with one recently issued by the Consumer Electronics Association, which predicted a U.S. 3DTV shipment tally of 2.1 million for 2010.

DisplaySearch said that despite the anticipated growth in 3DTV shipments, the electronics industry is running ahead of available content.

“3D content for TV remains limited to a small number of movies, plus some sports events on pay TV, which are dependent on cable providers,” the firm said. “Blockbuster movies in 3D, such as ‘Avatar,’ will not be available for 3D TV in 2010. In addition, the low penetration of Blu-ray players, and especially HD broadcasts, outside of North America and Japan affects content availability. Consumers may be tempted to wait for the ecosystem to develop in order to have enough material to watch. This, coupled with other significant obstacles for 3D implementation in the home, like consumer perceptions of 3D glasses, remain unresolved.”

“The loss in light output from 3D has made display efficiency a key attention point again,” Gray said. “Otherwise, a new generation of power-hungry 3D sets could return the industry back to where it started in energy consumption.”
--Deborah D. McAdams