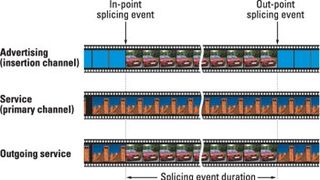 In any difficult transition, the elements that contribute revenue generally top the list of priorities. This is true for TV advertising as it moves along the inevitable digital transition path. Specifically, the cue tones, contact closures and video switchers long known as the means to airing a local advertisement are now well on their way toward digital splicing.

The reason for the transition is clear. Local cable TV advertising revenues topped $4.68 billion in 2006. Broadcasters collect a fee each time they issue a cue that allows a local ad to override a national ad. Meanwhile, as more cable and broadcast networks are digitally simulcast, and as consumers purchase more digital and HD displays, it is critical that advertisements reach all intended audiences.

This article describes the steps involved in digital program insertion (DPI), or the splicing and delivery of MPEG-compressed video streams. I'll briefly review the existing world of advertising cues and the new, spliced world, focusing specifically on how a digital splicer knows what to do in the few seconds preceding and following a local ad avail.

A brief history of ad insertion

Since the beginning of local advertising insertion, broadcasters indicated that an advertising avail was coming by broadcasting a series of in-band dual-tone multifrequency (DTMF) subcarrier audio cue tones. The tones triggered the cutover sequence from a nationally shown ad to a pod of local ads.

DPI is the digital counterpart for analog insertion and cue tones. As a technology suite, it automatically and cleanly places digitized, compressed ads into an MPEG-compressed transport stream.

The ANSI/SCTE 35 standard defines how local avails are signaled to video splicers, while ANSI/SCTE 30 defines the interface characteristics between video ad servers and splicing gear. An example of this is shown in Figure 1 on page 46. The advertisement within the insertion channel, shown on the top reel, is spliced into the primary channel in the middle reel at the indicated in-splice point. The outgoing channel (shown in the bottom reel) illustrates the primary channel with the alternate advertisement.

In a network playout environment enabled for DPI splicing, several steps occur. Digitized, uncompressed audio and video streams enter a video encoder, either from studio feeds or video storage servers. The encoder receives cue triggers from an automation system driven by the associated ad avail schedule. When a cue trigger is imminent, the encoder injects an ANSI/SCTE 35-based cue message into the outgoing, compressed video stream.

At the local cable headend, the integrated receiver and decoder (IRD) moves the cue message to the splicer to initiate the sequence of events that will result in a local ad insertion. When the cue message triggering a local avail transits through the IRD to the splicer, it responds by informing the ad server to retrieve the ad spots scheduled for that particular time. Then the ad server initiates the splice. The outgoing video streams the replaced (local) ad into the cable operator's distribution network.

In homes, the impact of DPI happens behind the scenes. For example, instead of seeing a nationally broadcast Ford F-150 ad, home viewers see an ad by the local Ford dealer.

A digital splicer must complete a sequence of actions within a short time frame to achieve a seamless, frame-accurate splice. As with most things that seem simple on the surface, there's considerable complexity underneath.

The completion of a seamless, frame-accurate splice, for example, isn't a matter of merely switching from one stream to another, as with analog or uncompressed digital video. Compression encoders generally process and buffer MPEG frames along two parallel domains: presentation order and decode order.

A group of pictures (GOP) representing the primary video channel may enter an encoder's buffer in a B-P-B-B-I-B-B-P order, for example, as shown in Figure 2. Only an intra-frame (I-frame) can initiate digital splicing in, for splicing into the primary channel. Splicing out can only be performed on an anchor frame, which is an I-frame or predictive frame (P-frame).

At the onset of a scheduled avail, the splicer begins looking for an out-point splicing event within the primary stream and an in splice point in the insertion stream for an upcoming event. The output buffer provides the cushion of time necessary to apply as-needed transrating during a splice event.

Once the I-frame for the in splice and anchor frame for the out splice have been identified, the GOP in the primary channel closes to allow a clean transition to the insert channel. Then the splice is initiated.

At that moment, the insertion channel is placed into the output stream. When the ad avail finishes and a cue message indicates a return to network source, the splicer engine has to look for an out from the insertion and in back to the network to complete the seamless splice. All of this happens within the broadcast timeline.

DPI splicing for ad insertion continues to evolve, most notably in the direction of segmentation, targeting and addressability. One manifestation, for example, is the personalized or enhanced ad, which involves attaching an additional data stream within the digital advertisement. That data stream carries localized information, such as the address of the local store or a clickable coupon. A set-top box in the home receives and processes this information.

Also on the near-term horizon is the industry-wide shift to advanced video compression engines, such as H.264. The good news is that the increased flexibility of the H.264 encoding standard allows for longer and more complex GOP structures. The challenge that this benefit presents is the subsequent increase in processing complexity required.

Both cases — segmented advertising and advanced compression — require a powerful encoding and splicing platform. And the vendor community is responding.

The intent of next-generation encoding and splicing platforms is to enable broadcasters and cable providers to increase splice density by as much as 20 times that achieved by legacy systems. In turn, increased splice density provides the room for revenue growth via new, segmented advertising models.

Again, in the overall digital transition, revenue-generating opportunities, or businesses poised for substantial revenue growth, tend to receive the most attention. DPI for advertising insertion is an early example. Other digital-in-digital splicing models will surely follow, particularly if the fundamentals are in place to enable more flexible splice opportunities.