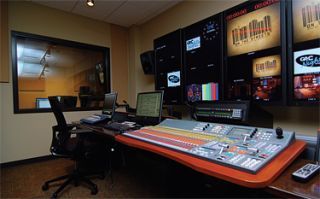 SEATTLE
When broadcast trade show attendees sit down for an after-exhibit hours beverage, the talk is usually about the latest and greatest electronics breakthroughs. Rarely, if ever, does the discussion turn to the studio consoles where those electronics packages will live and work during their useful lifetime.

Great American Country installed a Forecast Console in its Production Control Room. Monitors are suspended on the Forecast Sightline System. But the lightning pace at which broadcast equipment evolves means studio consoles have changed as well.

Large monitors are not new to the modern control room, but where they're being placed is.

"Customers are asking for, or their requirements are telling us, that they need larger monitors, 30-, 32- or 40-inch widescreen monitors, mounted on the back of the console instead of on the wall," said Peter Pedisich, senior designer for TBC Consoles in Edgewood, N.Y.

The reason for moving these large monitors closer is that—using a 30-inch LCD screen as an example—multiview displays might provide four 15-inch images on the screen. A 30-inch monitor with a single image on it, mounted some distance away on a wall, would be close enough for the operator to see what he or she needs. The smaller images provided in multiscreen views requires the monitor to be at the rear of the console instead.

Another recent change in console design stems from the fact that people don't always do as they were told early on in terms of maintaining posture.

"Your mom told you to sit up straight," said Randy Smith, president of Winsted Corp. in Minneapolis. "But nobody does."

ISO 11064, which speaks to control room design, now places CR monitors lower than eye level, "…which is why our consoles have that little cutout in the work surface, so you can drop your monitor down slightly below the work surface," said Smith.

Flexibility in monitor mounting design is also important because the monitors a facility has today are not likely to be the same ones required in the near future.

"Our Sightline monitor system allows the end-user to mount new monitors and configure them as need-be," said Bill Haberman, president and CEO of Forecast Consoles in Deer Park, NY. "Just one installation allows you to define different mounting scenarios, up to the ceiling, off the walls, mounted off the floor."

Fast changing monitor requirements are not the whole story in studio consoles. Where consoles used to be built with quite a few rackmounts above the work surface, "…we're seeing jobs where sometimes we won't even put in rack units, we'll just put in a shelf," said Pedisich. But he pointed out that where equipment may be disappearing from the area above the work surface, more space under the console is now devoted to housing the CPUs that bring computing power to the production equipment. Cooling and operator access—so drives can be swapped out easily— are important factors to CPU placement under that control surface.

Modularity of design allows console builders and their customers to pick the various pieces to fit the function of the control room and the equipment. Haberman compliments broadcasters in their approach to describing requirements.

"They're professionals. They'll come to us with an equipment list, booth size, and room function, and ask us to put together some ideas, he said."

Jerry Hahn demonstrates TBC Consoles’ adaptable IntelliTrac console at the 2010 NAB Show. The modularity of the systems, however, does allow customers to change the design while the equipment purchase and installation is in process. "In almost every case," said Smith, "we're talking about one monitor [when the order is placed], but by the time the installation takes place, the monitor model or size has changed at least once."

He likened it to the days when most equipment was rack-mounted, and he advised customers to wait in ordering blank panels until the installation was done, to determine what was needed.

Another ergonomic factor in console design is the ability to raise or lower the console. Pedisich noted that research has shown that it's beneficial to be able to work standing up for a portion of the day. For a single-worker console, such as in an edit suite, this might mean the whole console goes up and down as one unit.

This design would accommodate a director who liked to work standing up, or someone in a wheel chair.

Going green is another consideration when it comes to consoles. With equipment design and room functions changing constantly, customers don't want to be sending their consoles off to the landfill. Modularity takes care of a part of that, where even radical changes in design can still reuse some parts of existing units.

Haberman says Forecast has taken that another step, so that even if a customer does have to get rid of part of a console, the materials in those parts are recyclable.

"That's why we no longer use particle board in our consoles," he said. "We use metals or plastics that can go into the recycle bin instead of the trash. It's a very sustainable product."

There was a time when a control room console was designed one-off to last for years and years. The pace of equipment evolution has ended those days forever.