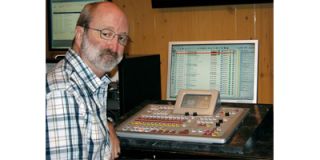 Mark Spiller of Commonwealth Broadcasting with the Snell ICE

Commonwealth operates Public Broadcasting System affiliates WCVE and WCVW in Richmond and WHTJ in Charlottesville, Va., collectively known as the Community Idea Stations. In addition, Commonwealth has recently contracted with public station WPTV in Harrisonburg, Va., to provide master control origination services for WPTV’s main HD channel, as well as its two SD. In order to support the three additional channels, Commonwealth has added two new ICE channel-in-a-box systems to the ICE units that have been playing out its own channels since 2009, including three channels for WCVE, three for WHTJ and one for WCVW.

“Because public broadcasters rely solely on viewer support and federal and state funding that is in constant jeopardy, ways to streamline operations, reduce costs and develop new revenues are always top-of-mind,” said Mark Spiller, vice president of engineering and digital operations at Commonwealth Public Broadcasting Corp. “The integration of Myers ProTrack with Snell automation and channel-in-a-box solutions affords us the ability to run our stations without 24-hour personnel, which represents huge savings. Plus, we can add channels in a highly modular and cost-effective fashion.”

In the current master control configuration, Myers ProTrack provides broadcast management, traffic and logging for each station’s playlist. ProTrack feeds data for all primary and secondary playlist items including programs, interstitials, promos, and PSAs into Morpheus, where it is automatically routed to a storage system or to an ICE server for playout. In addition to the original Snell router, Commonwealth has added another Sirius 128x128 router to provide for future expansion and to support the addition of WPTV, which is currently requiring only 32 inputs and outputs.