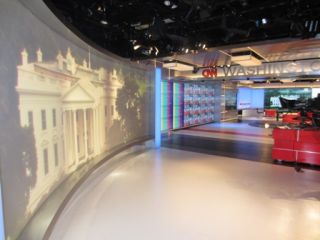 WASHINGTON: The political conventions are barely a blur in the rearview mirror, the attack ads are in even heavier rotation than usual and those all-knowing pundits are more righteous than ever. CNN launches its new Washington studio this week.

In other words, it’s time to elect a president again.

And it could hardly be a better time for CNN’s D.C. Bureau to debut its new, 2,200-square-foot HD studio. Featuring three large video walls and two “magic walls,” plus a glass divider to create two smaller studios, the new digs were constructed to accommodate various configurations and programming that is being produced for countries around the globe, all at once.

That’s the big news at CNN Washington bureau today, as its nearly 18 months-in-the-making, state-of-theart HD studio is getting a final few tweaks before it’s unveiled for the masses—just as the presidential race between Barack Obama and Mitt Romney shifts into fifth gear.

Come November, the focus of the world will be on D.C., so the cable news provider, which operates two dozen branded networks and services worldwide will need the versatility that will result in various configurations at what is known as Studio A/B.

READY FOR AIR
Situated in the new space—which holds 109 monitors and 2,000 feet of cabling— upon entrance from the left side is the first “magic wall,” which is one of CNN’s two 82- inch touch screens from Perceptive Pixel that “will offer exit polls, and state-by-state returns that will be broken down to include county-by-county data, for instance,” said CNN Washington Bureau Chief and senior vice president Sam Feist.

Feist then moved along to point to the Christie Digital Systems Video Wall that will be used for glamour shots of D.C. landmarks, various video images and moving graphics accents during reports by anchors Wolf Blitzer and Candy Crowley, as well as John King and other CNN correspondents.

The studio includes a 32-monitor video wall that can be divided in halves via the retractable glass wall (with a built-in shade) at the studio’s midsection, thus creating separate 1,100-square-foot production areas.

On the right side of Studio A/B is the other magic wall, plus an 18-monitor video wall that will be used to display the electoral vote on election night, among other news items. Two moveable monitors round out the assemblage of screens in A/B and give CNN options for an “infinite” number of configurations, according to Matt Speiser, CNN’s senior director, operations.

“Elections are about displaying election data,” Feist said, “and they tell a story that’s designed to help viewers understand who’s winning and why. That’s always that challenge in TV.”

But the new HD set “allows us to communicate, on screen more information than ever before,” he said. “This studio was designed with elections in mind and that’s where the magic walls come in. When the vote comes down to [the races in] Ohio, Florida and Virginia, for instance, we want to give our viewers the raw data on this great multi-tonal display.”

The studio will normally employ nine cameras, with four Sony HDC-2400s on each side, with another on a CamMate jib. On election night, the studio will feature 11 cameras, including three on pedestals, three Steadicams, three hand helds, the CamMate and one robotic camera.

BACK ROOM OPS
Another feature that on-air talent will find inviting is the prep room, which is located between the entrances to A/B, where they can check monitors, try out mics and print out scripts. The studio will be illuminated by more than 300 instruments, plus more than 2,500 feet of color-changing programmable LED lighting.

Built to support the information load of Studio A/B is Control Room A, which was “designed for big news events,” said Feist— which is immediately obvious, with its 70 monitors that carry feeds from the various networks. “There is no control room like it in the world, due to its custom design. It was made to produce big political events.”

Equipment of note in Control Room A, which came online in April, includes a Sony MVS-8000 switcher, Vizrt graphics and the Euphonix MaxAir audio console. An Evertz system is used to manage its monitor wall.

Control Room B will be employed for graphics, an d what is known at CNN as C Control houses the Vista Spyder system to manage images for the multiscreen walls in A/B. It can also be used to tape interviews, when needed.

Now that Studio A/B is a wrap, CNN is contemplating a technical upgrade to The Capitol Set, which is just down the hall from the new studio and is known for its view of the U.S. Capitol dome. Its key feature is a set that pivots on a column, and thus can also be arranged in various configurations.

TODAY’S MARKET
Feist said that the significance of the new setup is magnified by the fact that the new HD studio is CNN Washington’s first “since most of our viewers acquired HDTVs. So what we basically did in A/B was strip the old SD studio and rebuild it, basically from scratch, including repouring the concrete floors.”

Rebuilding the studio brought its own challenges, with some not as obvious. “Everything in HD is bigger,” said Speiser, “so we ended up leasing an extra half-floor” at the cable net’s now four-floor D.C. headquarters, located at 820 First Street, N.E., in the city’s up-and-coming NoMa neighborhood.

It was after the floor was set that came, perhaps, the hardest part of the upgrade.

“All of the elements that are in the studios were transported to the 11th floor location in a 4-foot by 8-foot elevator,” Speiser said. “Our team likened [the move] to building a ship in a bottle.”