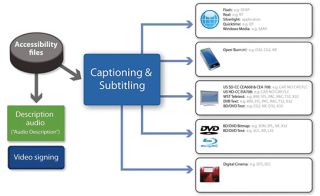 PADUCAH, KY.
Congress is currently considering adding new communications accessibility provisions as it updates the 1996 Communications Act. At press time, a bill, H.R. 3101, had been passed by the House Communications Subcommittee, and includes requirements for captions on small screen devices (both broadcast and broadband); re-instating the video descriptions requirement, as well as applying closed-caption rules to Internet streams and requiring video programming with emergency information to be conveyed to the visually impaired. In addition, it's likely there will be enhancements in traditional captioning as well.

Although new enforcement rules for filing closed-captioning complaints went into effect earlier this year, some in the industry don't believe that enforcement will increase.

According to Ralph King, CEO and founder of Comprompter News and Automation in La Crosse, Wis., the potential for fines has prompted broadcasters' interest in the company's voice-captioning systems. "Broadcasters are going to have to eventually shift to a voice recognition system," he said.

Softel’s Captioning & Subtitling Workflow extends to a range of media platforms. However, with the perception that enforcement has not increased, decision makers at stations are gambling that they won't be fined. "I've had managers call me and indicate that they knew they were not in compliance, and asked for quotes," King said. "But top executives were willing to gamble on not getting caught, so they just coast along."

King adds that modern voice recognition technology—either shadow speaking or live talent—has met or even exceeded the accuracy required by the FCC, depending on the quality of the operators. Although acknowledging that there are several options for voice recognition systems, Giovanni Galvez, technical developer for Computer Prompting and Captioning in Rockville, Md., says "we have products for live voice captioning right now, and are ready to take the leap."

Still the dominant force in live captioning, stenography has undergone a dramatic change as well. Phillip McLaughlin, president of EEG, a developer of captioning systems in Farmingdale, N.Y., says the company's new iCap platform does a total makeover of traditional modem connectivity via IP. "With a POT modem backup, iCap gives added security from auto-dialers, allows VoiP, minimizes dropouts, and allows logging capabilities," McLaughlin said, adding that, with products like iCap, advances in steno technology are likely to keep that type of captioning a mainstay for years to come.

Even encoder/decoders are changing. According to Renaud Defportes, technical director for Wohler for Europe and Asia, the desire for high density has come to the world of closed captioning encoder/decoder/bridges. At the 2010 NAB Show, the company unveiled its HDCC200A encoder/decoder/bridge available for both Evertz and Open Gear chassis. Defportes says the market is ready for card-type encoders as there is so much data to manage, and large facilities can be overwhelmed by traditional RU systems.

Although traditional closed captioning is thought by many to be a simple, fully utilized system, Juan Agudelo, national director of sales and marketing, for the National Captioning Institute in Chantilly, Va., says such options are still being improved upon.

"Although our latest products are focusing on the Web and mobile, even the existing 608/708 system in use today can do much to enrich peoples viewing and listening," he said. For example, "not only is Oprah closed captionined in English and Spanish, there is an 'Oprah sounding' actor speaking Spanish on the SAP." According to Agudelo, approximately 60 percent of closed captioning users have no impairment, and there is some information to indicate that kids from homes that use closed captioning read better.

In today's production environment, if it isn't live, it's likely been created using file-based editing. Closed captioning in post production has become more simplified in recent years. For such purposes, RadiantGrid "builds a media services workflow platform, from end to end," according to Kirk Marple, president and chief software architect for the Redmond, Wash.-based company, which develops transcoding and media workflow software. Marple says their products can marry captioning to content in the file domain, creating a caption XML file, and can extract closed captioning into textual file formats such as SAMI, for use in other media publishing applications such as DFXP, H.264, and SilverLight. When asked about file-based closed-captioning compliance issues on large asset libraries, EEG's McLaughlin points to the company's Caption Legalizer, which "conforms data signals to standards, [and] has acted as kind of a 'wonder-drug' for a lot of issues." Another approach to accurate file-based captioning is to export the EDL list. According to CPC's Galvez, "creating closed captioning based on EDLs helps accuracy and eliminates problems, as streams can vary depending on their intended path; for example, some would not contain black added for local commercials."

Comprompter’s Caption Central is designed to take studio audio in directly from the audio board and transcribe it into accurate caption text.MOBILE, HANDHELD AND WEB

Many broadcasters in the United States are streaming—on occasion—some type of programming, and with the recent adoption of A/153, many will soon start broadcasting Mobile DTV. Closed-captioning technologies for these formats already exist from several manufacturers. Sam Pemberton, CEO of Softel, a U.K.-based provider of closed-captioning and subtitling technology says the company has technology for a number of devices. "We have closed-captioning technologies for a variety of target platforms, not just television; DVDs-Blu-ray, the Web, mobile, and digital cinema." Pemberton simplifies the company's technology as "Early," "Late," or "Live Binding," adding that while some mobile/Web systems create a separate stream for subtitles, new technologies such as HTML-5 allow captions to arrive in the primary stream and be displayed in the familiar "TV" manner.

Some manufacturers are already working on closed-captioning issues for 3D, but early results are mixed. "Integrating a 2D footprint into a 3D image doesn't work well," said Tony Zare, product manager, modular products for Evertz Microsystems in Burlington, Ontario. Zare says while there is not a standard for 3D closed captioning yet, they want to be prepared. According to Zare, the characters could have top and bottom dimension, or side by side dimension, or both. "Either way our fourth generation encoder is ready, with SD-HD, 3G, and 3D capabilities," he said. "Even the monitoring for 3D closed captioning is a bit special. That's why we added 3D to our multiviewer line."

EEG's McLaughlin agrees. "We're big on 3D closed captioning, and we want to be ahead of the standard."