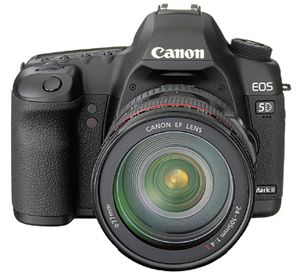 Canon’s E OS 5D MKII
NEW YORK
The season finale of the Fox hit series "House" which aired on May 17, marked the first prime-time network drama shot entirely on digital SLR cameras. The rapid ascent of the DSLR camera in virtually every production mode has spawned products ranging from camera rigs to matteboxes to audio solutions. Critical, though, to effective production use of the DSLR is selecting the proper lens for the given scenario. Those options range from manufacturer's optics to high-end precise glass.

The Canon EOS 5D MKII with its full-frame sensor and the Canon EOS 7D with APS-C sensor are becoming the go-to cameras for DSLR-video shooters, with the Panasonic GH-1K micro four-thirds camera also attracting a following. Current Nikon models are limited to 720p, restricting their use where full 1080 is needed. Both Canon and Nikon cameras are traditional SLR cameras in the sense that they have mirrors, while the Panasonic is mirror-less. This presence or absence of a mirror will impact the range of third-party lens mounts which the camera can accept. That will become apparent in the discussion of the various lens options available to the DSLR operator. Canon or Nikon cameras require the removal of the camera's mirror in order to accept an adapter to PL mount. The mirrorless Panasonic only requires an adapter, making it the easiest DSLR to utilize with PL mounts.

The 2010 NAB Show saw the introduction of Canon EF and Nikon F mount adapters for Angenieux Optimo 15-40, 28-76 and 24-290 zoom lenses. These adapters replace the standard PL mount to provide precise flange alignment. By adapting to the camera's native lens mount, there is no need to modify the camera. These specific Angenieux zooms are used extensively in film and video production and up to this point had only been available in Panavision or PL mount. "With the release of these mounts, we are addressing the latest trend in the film community that allows cinematographers to use our high-end cine optics on DSLR cameras," said Chris Beauparlant, vice president, U.S. Sales and Marketing, Thales Angenieux. The entry of Angenieux into the DSLR market truly shows the significance of this genre of highly portable and versatile format for serious video and cinema production.

Also at NAB, Zeiss announced a line of prime lenses with interchangeable PL, EF or F mounts. The choices are extensive with offerings in 18, 21, 25, 28, 35, 50, 85, 100 as well as a 50mm macro. They maintain maximum apertures of T2.1 to T3.5 across the line, with the widest lens (18mm) at T3.5 and the 21 and 25mm glass at T2.9. They are characterized by a long focus throw, rugged construction and consistent front size for interchangeability of filters and other attachments. They all feature calibrated lens scales as well.

Unlike conventional video and cinema shooting styles, DSLR shooters tend not to utilize zoom shots. This is due in great measure to the rolling shutter effect which could plague DSLR footage shot improperly. Hence, DSLR DP's make far greater use of primes. Delivery is expected to begin this month at a price of $3,900 per lens with one adapter plus $390 for additional adapters.

A final NAB 2010 announcement was the addition of two lenses to the Fujinon PL zoom family. "There is a lot of excitement about Fujinon's new PL zooms because of their speed, ranges, and optical quality," said Chuck Lee, Fujinon technology manager. "Feedback from early users of the PL Series has been enthusiastic. All have been impressed with their low light capabilities, consistent performance, and close color match to industry leading prime lenses." Indeed, a product line which includes 24-180 mm, 14.5-45 mm, 18-55 mm and 75-400 mm can provide tremendous versatility while maintaining high quality. As would be expected in a lens family, all four lenses are matched optically.

The season finale of the Fox hit series “House” which aired on May 17, marked the first primetime network drama shot entirely on digital SLR cameras. Schneider-Kreuznach now offers a choice of 18, 25, 35, 50, 75 and 95 mm prime lenses also with a choice of EF, PL or F mounts. The complete set is priced at under $25,000 with lenses also available separately in the $4,000 range. While mounts are interchangeable, they are not user interchangeable, requiring return to depot for reconfiguration. What distinguishes the Schneider-Kreuznach line is ultra close focus as well as 18-blade iris and low distortion glass. Schneider promises additional focal lengths over the coming months.

Canon and Nikon optics have been the mainstay of professional photographers for generations. Yuichi Ishizuka, Canon USA executive vice president and general manager, Consumer Imaging Group, notes that the "House" episode was not only shot entirely with the Canon 5D Mark II, it was shot with Canon EF lenses.

Indeed with its new emphasis on DSLR production, Canon specifically gears its EF line for full-frame 5D Mark II or its EF-S line for the smaller APS-C sensor found in the 7D (and its smaller sibling the Rebel EOS T2i). A strong consideration in this series of lenses is the availability of IS (image stabilization) lenses, which provide electronic stabilization making hand-held shots considerably more stable. IS can also be turned off on these lenses.

The DSLR already offers a new versatility in production. The range of lenses available will scale these cameras to the level of quality required for a specific production.