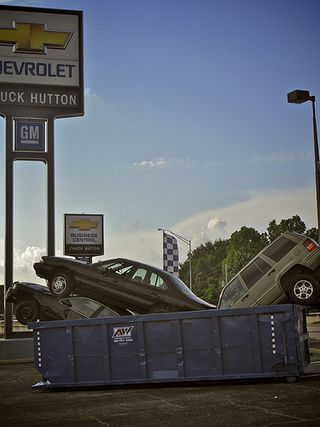 NEW YORK: Local media got an injection from Cash for Clunkers, but now observers are wondering what comes next.

“Cash for Clunkers finished its four-week run, yielding 690,000 deals for $2.88 billion, which likely helped local advertisers specifically radio and TV broadcasters,” Wells Fargo analyst Marci Ryvicker writes. “The question is, what will auto look like now that this stimulus program has ended?

“We spoke with several groups, who are confident that auto has reached the bottom and will improve--although nowhere near the ad category’s historical level of spending.”

Les Moonves, CEO of CBS, said in early August that both the network and its owned-and-operated stations were benefiting from Cash for Clunkers.

General Motors and its dealerships, once among the biggest spenders in the category, were not among the top 25 during the second quarter. Honda, Chrysler, Toyota, Ford and Hyundai were among the top 25, as were Ford, Toyota, Volkswagon and Hyundai dealership associations. Only one, Volkswagon’s dealer association, increased spending compared to a year ago by around 1 percent.
-- Deborah D. McAdams
(Image by Stephen Hackett)