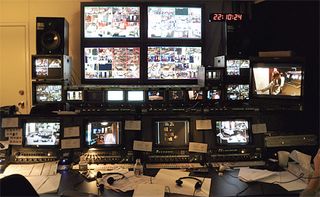 BURBANK, CALIF.—In the 1998 movie "The Truman Show," Jim Carrey plays Truman Burbank, an average guy whose every second of life is captured by hidden cameras and broadcast to a worldwide audience.

Chef Ramsay lines his apprentices up for a pep talk. In contrast to the movie, the long-running Fox-TV reality series "Hell's Kitchen" is anything but an act of fiction. But the techniques used to film this program featuring fiery chef Gordon Ramsay mirror many of those used in "The Truman Show."

The show is based at the Century Studio Corporation sound stage in Culver City, Calif. and produced by A. Smith & Company, which also produces "I Survived a Japanese Gameshow," "Kitchen Nightmares," and "Crash Course," according to "Hell's Kitchen" Executive Producer Kent Weed.

"At the heart of our complex is a sophisticated master control room reminiscent of a 1960s' NASA control center," Weed said. "Around this room is built a complete restaurant-style kitchen and dining area, plus dormitories for the show's contestants. All of these are covered by cameras and microphones, giving us a 24/7 window into what's happening around the clock."

From a viewer's standpoint, "Hell's Kitchen" is all about the antics of chef/host Gordon Ramsay and the trials he puts his chef contestants through. Chef Ramsay neatly summed up his style in a 2007 interview with Ireland's Sunday Tribune newspaper: "I maintain standards and I strive for perfection. That level of pressure is conveyed in a very bullish way and that's what cooking is all about."

From a producer's standpoint, the show is about capturing real people reacting to Chef Ramsay's standards, and doing this invisibly so that the cameras don't affect the action.

"Our goal is to provide so much camera coverage from so many angles, that we never have to stage anything—as other reality TV shows do to cover gaps in their stories," Weed said. "We want the viewer to see not only what's happening, but to witness it from various points of view. In this way, they get to decide what the story is in all its complexity."

“Hell’ Kitchen”’s master control room monitors 69 Sony BRC-H700 robotic pan/tilt/zoom HD cameras scattered throughout the facility. To do this, Weed employs 69 Sony BRC-H700 robotic pan/tilt/zoom HD cameras scattered around the "Hell's Kitchen" complex, with many of them hidden behind one-way glass to provide unnoticed surveillance, (26 of these units are IR-capable for unilluminated night shots.) The BRC-H700s are bolstered by 10 handheld Sony XDCAMs, which are deployed as required (i.e. during crowd scenes in the dining area). Microphones are strategically located around the "Hell's Kitchen" complex, to provide quality audio no matter where the action is taking place.

All of the robotic cameras go into "Hell's Kitchen"'s master control room, where up to 30 people are working at any given time. "We usually have 24 video feeds up at any one time, with four techs monitoring them and the audio feeds," says Weed. "We have such complete coverage, that in theory we could live-switch the show, rather than edit it for broadcast later."

Much of the show's drama takes place in the kitchen, which is covered by hidden cameras. "A chef can be standing by a one-way mirror losing it, and never be aware that there's a camera just inches away, capturing his reactions," Weed notes. "Even though the contestants know the cameras are there, they soon forget them—and that is what allows them to express their true feelings for everyone to see."

The use of hidden cameras, coupled with the contestants becoming accustomed to the few camerapeople they see from time to time is what delivers "Hell's Kitchen"'s truly authentic reality TV, according to Weed. "People only wear their public masks for so long; especially when they don't think anyone is watching," he said. "It doesn't take long for the viewers to see who the contestants actually are; not just when they blow up due to the pressure, but also when they break down. Love it or hate it, what you see on our show is the real unvarnished truth."

Now in its ninth season, the show has moved to larger premises (its original home was at a defunct Los Angeles TV studio), and added more cameras. "We always try to keep the show fresh," Weed said. "We never want it to become old or routine."

As for the future? Weed already has his eye on miniature "necklace" cameras, which would take "Hell's Kitchen"'s point-of-view shooting to a new covert level. "Just imagine what we can capture in two-way interactions with such technology," he marvels. "We're already planning how we are going to experiment with this!"