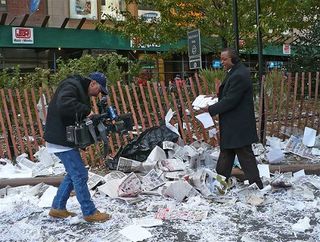 WASHINGTON: More people watched TV news last year. That’s the good news for broadcasters. The bad news is that more eyeballs did not translate into more profit. That’s the conclusion of the latest “State of the News Media” report from the Pew Research Center’s Project for Excellence in Journalism.

“Our analysis suggests that news is becoming a more important and pervasive part of people’s lives,” PEJ Director Tom Rosenstiel said. “But it remains unclear who will benefit economically from this growing appetite for news.”

The audience for both local and national broadcast news grew last year for the first time in years, due in part to increased consumption on mobile devices. Pew researchers said 27 percent of Americans now get news on mobile devices, which is adding to their usual viewing time. The trend is not, however, adding to the bottom line for broadcast news organizations. Ad revenue fell 3.7 percent for national news last year, while local news experienced a 6.7 percent drop.

Enter the “technology intermediaries”—those companies dominating mobile content access and consumption. Pew researchers said five tech giants cornered 68 percent of 2011 digital ad revenues, not including Apple and Amazon, which generate revenue from downloads and devices. By 2015, Facebook is expected to take one in every five display ad dollars online.

At the same time, Facebook isn’t necessarily the go-to place for news. The report said about one-third of news viewers followed stories through Facebook versus those using news websites or apps. Twitter was used even less—about half as much as Facebook. However, both are on the rise in the news referral department. PEJ’s analysis of traffic data from Hitwise indicated 9 percent of traffic to news sites now comes from Facebook, Twitter and smaller social media sites, up by more than half since 2009. The percentage coming from search engines, meanwhile, has dropped to 21 from 23 percent in 2009.

“News organizations have a big opportunity in the social and mobile realms,” PEJ Deputy Director Amy Mitchell said. “But they will need to do a better job than they did in the desktop realm of understanding audience behavior and developing effective technology and revenue models.”

Privacy concerns complicate matters. Around two-thirds of Internet denizens are uncomfortable being tracked and targeted by advertisers.

“At the same time, though, consumers rely more heavily on the services provided by the companies that gather such data,” Pew researchers said. “News organizations are caught in between. To survive, they must find ways to make their digital advertising more effective—and more lucrative. Yet they also must worry about violating the trust of audiences to protect their strongest assets—their brands.”

As for local TV news, viewership was up in 2011 for the first in five years. The morning news audience edged up 1.4 percent, and for late evening, it grew 3 percent. Viewership for the very early morning timeslot quadrupled, driven by more newscasts starting at 4:30 a.m.

The Big Three logged the first news audience growth in a decade. Average viewership for the evening news across ABC, CBS and NBC increased 4.5 percent—by 972,000 people—in 2011. An average of 22.5 million people watched ABC, CBS or NBC’s news each night in 2011. The morning newscasts averages 13.1 million people, up 5.4 percent from 2010. The PBS “NewsHour” came in about the same as 2010 with an average of 1.1 million viewers nightly.

Cable news logged a 1 percent audience increase in 2011, according to the Project’s analysis of Nielsen data. An average of 3.3 million people watched cable news on a “typical night,” researchers said. CNN’s audience was up 16 percent in prime time; MSNBC’s grew 3 percent in prime time and 20 percent during the day. The audience numbers fell for the second year in a row for Fox News, still the ratings leader of the three.