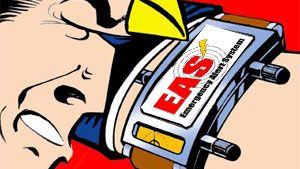 WASHINGTON: The Advanced Television Systems Committee has begun to standardize the new broadcast emergency alert system as an addition to the ATSC A/153 Mobile Digital TV standard. The work will make it possible for mobile DTV viewers to receive rich-media alerts during emergency conditions.

The Mobile Emergency Alert System (M-EAS) enhancements to the A/153 standard will provide capabilities for delivering messages with video, audio, text, and graphics to mobile DTV-enabled cellphones, tablets, laptops, netbooks and in-car navigation systems. M-EAS requires no additional spectrum and is an additional use of existing TV transmitters and towers.

“The ability to reach millions of people with a single transmission avoids the chronic congestion of other communications networks during emergencies. This inherent scalability always has been one of the biggest public service benefits of broadcasting in times of emergencies. And, at this stage of mobile DTV's evolution, we believe the time is right to standardize mobile emergency alerts. We're moving ahead with a proposal to include the methodology for providing emergency information to mobile/personal/handheld TV receivers,” said ATSC President Mark Richer.

The ATSC’s decision to standardize M-EAS follows a nationwide pilot project that delivered rich multimedia emergency alerts to prototype mobile DTV receivers and proved the viability of M-EAS. The year-long pilot project was undertaken by the Public Broadcasting Service and LG Electronics. It was co-funded by the Corp. for Public Broadcasting, LG and Zenith and received technical support and additional funding from NAB Labs, Roundbox and Harris Corporation.

The development of an ATSC standard for Mobile Emergency Alerts has been assigned to the organization’s TG1/S4 Specialist Group on Mobile Digital TV. Work is already underway to consider backwards-compatible changes to the A/153 Mobile DTV standard to accommodate the new M-EAS capabilities. The changes will not affect the performance of current generation mobile DTV or fixed ATSC receivers.