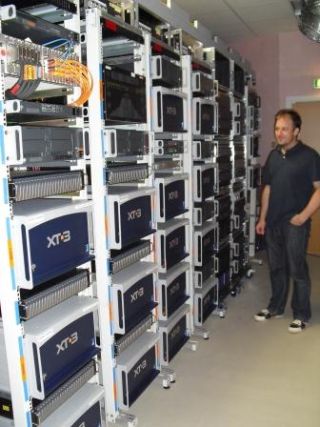 ARD/ZDF EVS Administrator Patrick Jung amongst some of the 17 EVS XT3s at the IBC.

LONDON -- German public-service broadcasters ARD and ZDF take technology and the advantages it brings to a broadcast seriously; but when broadcasting something as important as the London Games, technical changes are taken step-by-step.

In Beijing, they made the jump to tapeless, though still working in standard definition. Less than two years later the full leap to HD tapeless production took place in Vancouver. In London, HD production met the sheer tonnage of events that comprise a Summer Games.

Servers were again central to the operation. They were used in ingest, playout and production at the International Broadcast Centre, and mostly in a highlights capacity at various venues where the broadcasters had a presence.

Two things helped ARD/ZDF manage the volume of all those recorded HD files. One was simply an increase in the SAN built up around the core, 17-machine EVS XT3 infrastructure in the IBC.

Importantly, the XT3’s themselves were the very latest units. Jung said the latest versions of the machine had 900 GB hard drives in a box with the same footprint as the old machines, which had 300 GB drives. Jung said the new machines could hold 300 hours on each machine: “This is three times the hours in the same physical space.”

HD WORKFLOW
Beyond the volume of events and managing all those big HD files, ARD/ZDF’s workflow was not radically changed from Vancouver. In London, ARD/ZDF recorded and logged incoming feeds on the EVS systems, with material transferred on to Avid/Isis storage for editors to create finished pieces. If the programming schedule required speedy airing, material was played out directly from EVS servers.
The broadcaster used the latest version XT3 machines, which have 900 GB drives capable of storing 300 hours of HD material.
There were incremental changes to the workflow and infrastructure. In Vancouver a few EVS channels had recorded a 24-hour loop of all incoming feeds, a way to give the production team a second chance in case they needed material they had missed. In London ARD/ZDF continued this practice, but also deployed five stations of the IPBrowse service from host broadcaster OBS. This service allowed rightsholding broadcasters (RHBs) to look at lo-res browse copies of content before picking only needed content for HD-res delivery to an EVS server in their facility.

What other software was deployed in London? EVS IP Director software had browsing and administrative functions, and was also used for sending clips.

The Germans had an interesting use for IP Edit software, which is often used as a quick “rough cut” editor by broadcasters. At ARD-ZDF, however, it was used in an audio capacity as a supplement to fast-turnaround linear editing using traditional EVS edit controllers. The video playlist is taken in to an IP Edit and the audio -- off tube commentary and more -- is quickly added.

SEEING IT ALL
One software improvement proved quite helpful in managing a “big event” broadcast like the London Games. Jung -- whose title is EVS Administrator -- said that the administrative software to manage and configure a networked EVS infrastructure had been improved since Vancouver. Before, an administrator had to go to each machine to check parameters.

“Now, one software can check all the machines for stream status, temperatures, all the things that need to be monitored,” said Jung. “It’s peace of mind.”

As for other “up and coming” host broadcaster services, Jung said the host broadcaster service called the Broadcast Data Feed was not used in London, but would be given serious consideration for next time. This feed had within it all the logging data from the massive OBS pool of EVS servers, and more, as metadata tied to the video timeline. It even provides clip duration and captures key frames.

Tracking and searching for content in a high-volume big event operation is critical, and the increased visibility on a clip-by-clip basis adds value to host assets, making desired content easier to find and providing more information.