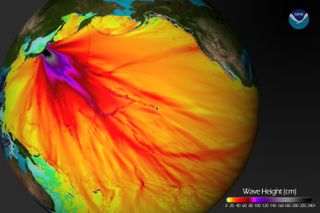 WASHINGTON: The big U.S. science agencies are releasing images illustrating how last Friday’s tsunami affected the Pacific Ocean and the Japanese coastline. NASA published a satellite image (below) of a pock-marked Japanese coastline following the event, triggered by an 8.9 magnitude earthquake 81 miles east of the coastal city of Sendai.

The dual image shows the same 48-by-64 mile area before and after a sea surge swept 2.5 miles inland. The first shows a uniform line of white-sand beach, taken March 16, 2001.

The March 12, 2011 image shows a broken coastline with characteristics of a river delta. The NASA images were captured with the agency’s Multi-angle Imaging SpectroRadiometer its Terra spacecraft.

The National Oceanic and Atmospheric Administration created in image (above) of expected wave heights across the Pacific. The model anticipated a wave surge of eight to 12 feet approaching Japan’s coast near the epicenter of the earthquake. The wave height is seen to decrease in the deeper areas ocean floor and again rise as the reverberation reaches the United States and other countries along the Pacific.