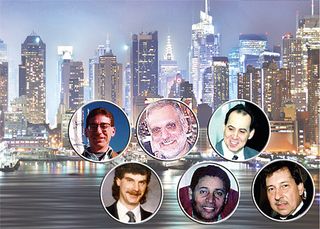 NEW YORK: Bill Steckman was working on Tuesday morning, Sept. 11, 2001, shortly before 9 o'clock. But unlike thousands of others in the North Tower of the World Trade Center, the WNBC-TV transmitter engineer was not just reporting to work. Instead, he had already finished his regular overnight shift and remained at his post a bit longer to help install some new digital equipment.

Top (L-R): Don DiFranco, Steve Jacobson, Gerard “Rod” Coppola Bottom: Robert Pattison, Isaias Rivera, Bill Steckman Minutes after the tower was hit by a commercial jetliner, Steckman was able to get word out by phone of the encroaching smoke on the 104th floor—half of which WNBC-TV shared with financial bond trader Cantor Fitzgerald.

Six floors above in the same tower, five fellow engineers were coping with increasingly ominous conditions. Working that morning in the windowless maintenance facility on the 110th floor were Don DiFranco of WABC-TV; Gerard "Rod" Copolla of WNET-TV; Steve Jacobson of WPIX-TV; and Bob Pattison and Isaias Rivera of WCBS-TV.

"It was typical for all the stations to have someone up on the 110th floor or another location like the 104th," said John Lyons, vice president of broadcast communications for the Durst Organization, which leases tower space to several broadcasters at 4 Times Square.

"From about 8 a.m. to 4 p.m., typically all of the stations were manned somewhere up in the North Tower."

Steckman, a WNBC(TV) employee for 35 years, and his five colleagues eventually were listed among the more than 2,750 dead and 6,000 injured in Manhattan a decade ago.

Don DiFranco in an undated photo at the transmission facility atop the World Trade Center "It's still difficult to think on it. Bill was the same age that I am now… 56. That's way too young to be cut short like that." Steckman was born on Christmas Eve of 1944.

Steckman had four daughters and a son. Deanine Nagengast said she continues to cherish memories being with her father.

"He was able to see me graduate college, get married, buy a house and share our love of boating together with my new husband Jim," she told TV Technology.

"I do get frustrated and angry that he was not here to see my children being born or have them know and love him as 'Pop Pop Bill,' as the other grandchildren did."

Nagengast said she tries to keep his spirit alive within the family, "telling them stories about him, or things he would have said and done. The hard part is when they ask what happened to him, 'Why is he in heaven?' These are questions with answers I have yet to figure out myself."

"Bill was my transmitter guy," says former WNBC-TV Chief Engineer Jeffrey Birch, who knew four of the six men. "He was one of the most giving and selfless people any of us would ever hope to meet."

WABC-TV RF Supervisor Don DiFranco, 43, was born and raised in Brooklyn, where he was living in 2001. Station Engineer Al Silvestri remembers him as a good friend.

"A very smart guy—quite knowledgeable about broadcast issues. And quiet. Don was very dedicated to his job and almost a fanatic about it. He was an excellent technician. He could fix anything. And put up anything… like the new HD transmitter," Silvestri said.

"I went to college with Don," said Birch, now vice president of engineering for CBS Television Stations Division. "Then we had crossed paths years later at World Trade after we had attended Staten Island Community College."

Mast to Rise Again; Museum to Honor Engineers
NEW YORK—Part of the main antenna mast from the roof of the North Tower of the World Trade Center—easily visible in many pre-Sept. 11 depictions of the New York skyline—will be hoisted once more, albeit in a museum setting.

The main antenna atop the World Trade Center. Photo by Doug Lung A new office tower will rise a symbolic 1,776 feet to the tip of the highest pole on its roof (which, to date, is not likely to hold any broadcast antennas this time). But a nearby museum set to open in September 2012 plans to exhibit part of the original antenna mast—perhaps 16 to 18 feet—that survived from the North Tower.

Associate Curator Amy Weinstein of the National September 11 Memorial & Museum told TV Technology that other mementos of the North Tower's broadcast transmission facilities from the 110th and 104th floors may included, as well as special audio recollections by family members of WNBC-TV Engineer Bill Steckman, and perhaps other broadcasters.

Along with the museum, a memorial scheduled to be unveiled this month at the original site will include the names of all those who perished on Sept. 11, 2001, in Manhattan. A couple of planned panels at the North Memorial Pool will include those names representing the six engineers. Weinstein said their formal names will appear as:

In the days immediately following the 9/11 attacks, the charitable arm of the Society of Broadcast Engineers created the Broadcast Engineer Relief Fund to help the families of the six men. Don DiFranco of WABC was an active SBE member.

"With donations from many members of SBE, and vendors and industry foundations, we were pleased to send checks of $42,500 each to every family… without any strings attached," said SBE President Vinny Lopez. "Every penny [raised] went directly to the families."

Also, the New York chapter of NABET-CWA, Local 16, had set up a Scholarship Fund in memory of DiFranco, which continues today. Donated funds are used for scholarships for offspring of Local 16 members to pursue technical degrees at Staten Island Community College.

John Merli A few days after the 9/11 attacks, former WABC Engineering Director Bill Beam issued a staff memo that read, in part: "[DiFranco's] attention to detail left no room for compromise in the quality of the video and audio that passed through the transmitter plant… At his insistence, manufacturers often found ways to improve the products that were part of the transmission system at the World Trade Center."

Beam, who today heads WH Beam Associates, says 10 years later, "Those of us close to the events of that day have never forgotten these men."

Isaias Rivera of WCBS-TV was a native of Puerto Rico who lived in Perth Amboy, N.J.

Rivera spent most of his time away from the North Tower as an evangelical pastor. At age 51, he had already worked for both WCBS-TV and CBS Network for more than 30 years, having begun his career in the CBS mailroom. A survivor of the first terrorist attack on the World Trade Center in 1993, Rivera also mentored troubled youth in Spanish Harlem and other tough neighborhoods.

After Sept. 11, many of the youngsters he once helped had returned to honor him. In fact, those paying respects at his home reportedly numbered in the hundreds, coming to pay homage to their mentor in the company of their own children and spouses, according to the archives of the Newark Star-Ledger. Rivera was survived by his wife and four children.

Bob Pattison, Rivera's colleague at WCBS-TV, at 40 was the youngest of the six men.

A devoted lover of crossword puzzles and words, he had at one point during a challenging upbringing thought seriously of becoming a writer. He served a stint in the U.S. Air Force before signing on with the CBS O&O in 2000.

His brother, Brendan Pattison, had noted that shortly before Sept. 11, Bob had the first chance to hold his two-week-old niece. That family event, a colleague noted later to WCBS-TV news, had put an uncharacteristic spring in Pattison's step on the morning of Monday, Sept. 10, 2001.

"Rod and I had hung microwave gear together a few months earlier, and he was always willing to help out in anything," said Birch.

Baker vividly recalls his work with the public TV engineer over that last summer: "The transmitter we were using was from the same manufacturer as Thirteen [WNET] and we able to easily exchange modules whenever we had a blowout. We worked with Rod and Thirteen on that quite a bit."

Born and raised in East Orange, N.J., Coppola bought his own 2-watt radio transmitter at age 12. Coppola would have turned 47 in November 2001. An amateur songwriter and high school rock musician, Coppola is survived by his wife and four daughters.

Steve Jacobson of Tribune's WPIX-TV was a native New Yorker. Lyons, who was working for Clear Channel's WAXQ-FM on Sept. 11, remembers Jacobson "always had a very dry sense of humor, always kind of a little grin on his face. He used to wear a sloppy fedora, and after a day's work it was always like watching Steve literally 'walk into the sunset.'

"It gives me goose bumps to think about it again, but I can still see Steve today walking down that hallway heading home."

Jacobson, 53, also had been in the North Tower during the 1993 attack. A New York Times archival profile reported that a fellow engineer had run out to retrieve lunch for the men that day, only to alert Jacobson urgently by phone that smoke and flames were starting to engulf part of the World Trade complex. Jacobson reportedly deadpanned: "Does this mean I don't get my eggroll?"

"They were all very selfless," Birch said. "We were competitors, but we always helped each other out up at World Trade. It was all such a tragic loss back then. It's still a tragic loss today."

The author acknowledges the contributions of the engineers who assisted with this article, including CBS TV Stations Liaison John Byrne.