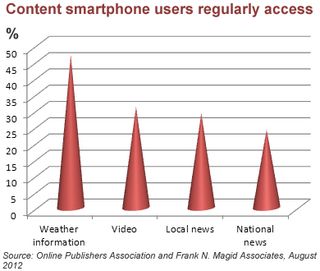 The top types of content smartphone users in the United States access on their devices include weather information, video as well as local and national news, according to the results of a study conducted by the Online Publishers Association (OPA) and Frank N. Magid Associates.

The results, released Aug. 20, revealed that besides making calls, the top use of smartphones was to access content and information. In all, 93 percent of smartphone users regularly access content and information. The study found 47 percent use their device to access weather information, 31 percent turn to their smartphone to watch video, 29 percent reported accessing local news on their devices and 24 percent consumed national news on their phones.

The results also revealed that 59 percent access the Internet with their smartphones and 58 percent check e-mail.

For the study, Frank N. Magid Associates conducted a nationally represented online survey of 2540 people between 8 and 64 years old. The survey was taken March 19-26.