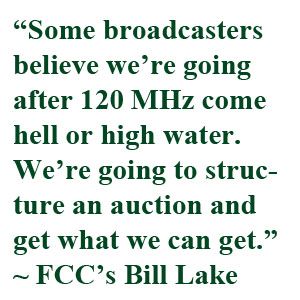 LAS VEGAS: Contention is the sole certainty surrounding the reassignment of broadcast spectrum for broadband. Regulators claim there’s a “looming spectrum crises.” Broadcast advocates beg to differ. The situation from there devolves. One broadcaster attending the spectrum panel discussion at 2011 NAB could not hold back during the Q&A session. Identifying himself as the chairman and CEO of Fox 23 in Portland, Maine, and WMEI in Puerto Rico, he called the spectrum reassignment a “cash grab.”

“I have never heard so much nonsense in my life,” he said. “I’m a minority broadcaster. I have had to work, I have had to sweat, I have had to bleed to get my six licenses. You’re talking about a cash grab. We can’t even get money from banks. We can’t do anything right now.”

Though the current FCC proposal calls for voluntary relinquishment, he was skeptical. Only the biggest wireless players, e.g., Verizon and AT&T, would have the money to participate in spectrum auctions, he reasoned. Cash-strapped broadcasters would be pushed into relinquishment by the capital markets.

“It would be the flow of the dough,” he said.

Bill Lake of the Federal Communications Commission was part of the panel.So was Alan Frank of Post-Newsweek Stations, who joked that had the government shut down, Lake would not have been able to attend.

“I’m wondering now if he doesn’t wish it would have shut down,” Frank said after Lake took a bit of a brickbatting over the FCC’s plan. The commission is pursuing a scheme to split auctions proceeds with broadcasters who hand over spectrum for broadband. The arrangement is part of the National Broadband Plan. Lake was the sole FCC official on the panel, which also included Mark Fratrik of BIA/Kelsey, John Hane of Pillsbury Winthrop Shaw Pittman LLP and Jane Mago of the National Association of Broadcasters.

The commission requires Congressional authorization to hold incentive auctions where incumbents receive a portion of proceeds. FCC Chairman Julius Genachowski was at the White House last week calling for Congress to act. Frank, president and CEO of the six-station Post-Newsweek group, said there was insufficient information to pursue auction authority. Lake said the FCC intended to issue a Notice of Proposed Rulemaking on incentive auctions before any commenced. Frank then asked why authorization was necessary if there would be no auctions without an NPRM.

Hane, a communications attorney who specializes in spectrum issues, said it was still too early to tell if this Congress would provide authorization.

“Incentive auctions are a relatively new idea in Washington,” he said. “I think there is a meaningful constituency that has a philosophical issue with the incentive part. It’s uncertain, but it could happen. Broadcasters need to watch it very closely. It’s very much alive.”

Lake said incentive auctions may end up not looking so bad in hindsight.

“It’s easier to stop legislation than to push it through,” he said. “We are in a situation now where we are in a spectrum crunch, we’re not in a spectrum crisis, but there is a crunch. . . and there’s an opportunity for win-win with spectrum incentive auctions. Options in 10 years may be less attractive than they are today.”

Mago said the NAB doesn’t oppose incentive auctions per se, but rather the wholesale pursuit.

“Why do we have to keep moving forward as if there’s only one answer without knowing all the pieces?” she asked rhetorically. “That’s been the real question all along--what are all the pieces?”

Frank asked Lake what impact the AT&T-T-Mobile merger might have on the spectrum “crunch.” Lake reiterated projections in the National Broadband Plan of a 35x increase in data consumption between 2010 and 2015. Hane then went on a tear.

“Let’s be clear. There is no looming spectrum crisis,” he said. “The debate is not about whether we’re running out of spectrum. . . actually the demand was in 10 or 12 population centers. It’s not a looming nationwide spectrum crisis. It’s a potential shortage in 10 or 12 markets some time in the future. What we are debating is whether spectrum with excellent propagation properties should be assigned to broadband instead of broadcasters. What we’re talking about is giving better spectrum to the wireless industry to reduce their deployment costs. Maybe that’s a good thing, maybe it’s not, but it’s not about a spectrum crisis.”

Lake countered that a spectrum crisis in 20 or 30 large cities is a national problem.

“We don’t have to be right about our projections,” Lake said. “If there isn’t a demand for spectrum, then it won’t get sold.”

Hane said wireless companies would bid because of the propagation properties. Mago asked if broadcasters offering up spectrum would get to set their own reserve price. Lake said the incentive auctions would be structured in the aforementioned rulemaking, which likely would provide that a volunteering broadcaster would submit a reserve price.

“When we structure an auction, we might not set the minimum at the reserve. It might be more than that but it wouldn’t be less than that,” he said “My guess is, the soonest we could do this is 2015” if Congress provides authorization. The goal of the National Broadband Plan is to reassign 120 MHz of the broadcast spectrum for broadband, but Lake inferred that wasn’t a hard number.

“Some broadcasters believe we’re going after 120 MHz come hell or high water,” he said. “We’re going to structure an auction and get what we can get.”

Fratrik asked him what would happen if the commission ended up with a bunch of disparate spectrum after the auctions.

“We have thought about it,” Lake said. “It may be more expensive to get spectrum in some cities. The desirability to get spectrum nationwide may indicate a we’ll pay more. As desirable as contiguous blocks of spectrum are, it’s possible to auction off a block covering the Northeast region,” for example The FCC has auctioned regional licenses before, he said. “There may be companies that would bid on regional licenses that would not bid on a national license.”

At the end of the discussion, the devil remained in the details. The National Broadband Plan promised models that have not yet materialized. Lake said it was taking “longer than anyone hoped.”

“One issue is accommodating Canada and Mexico,” he said. “One model used distant measures around stations. They’re now using contours, which are more complex.” Lake said he hoped the models would become available within the next few months.
~ Deborah D. McAdams