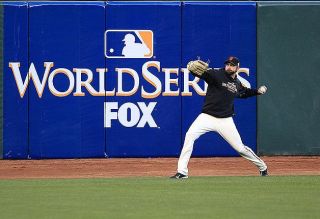 NEW YORK: The five-game World Series between the San Francisco Giants and the Texas Rangers brought in the second-lowest TV audience on record, according to Nielsen. Fox’s broadcast of the series drew an average of 14.3 million viewers per game. The low-water mark was 2008, when the games between the Philadelphia Phillies and the Tampa Bay Rays drew an average of 13.6 million each.

Last year’s six-game World Series between the Phillies and the New York Yankees drew an average of 19.4 million viewers per game for Fox.

Despite the historically low audience numbers this year, Fox won four of the five nights the Series was broadcast. The games generated a total of 16 hours of programming, and ranked the seventh most-watched primetime program for the current broadcast season.

The Series concluded with the Giants taking home the pennant for the first time since 1954. Nielsen said 65 percent of TVs in San Francisco were tuned into Game 5.
-- Deborah D. McAdams