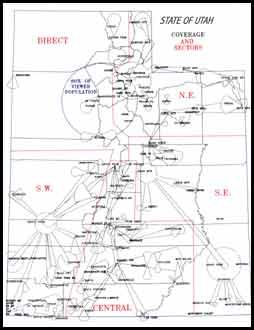 It is now a reality. Microwave and TV translators in rural communities are relaying mountaintop-to-mountaintop 8-VSB digital television by using a statewide system. These over- the-air broadcast signals are delivering digital signals (including high definition) and also improving existing analog reception to the end viewers.

It is widely believed that Utah has the largest terrestrial-analog translator network in the world. The system provides rural viewers with over-the-air television in approximately 80 percent of the state. This is accomplished with some 600 authorized analog stations, which are true translators, not LPTV stations or ones fed by satellite signals. The network encompasses 100 sites and averages six translators per site, with as many as six hops in one chain. The south-central part of the state receives the Salt Lake City DTV stations 80 miles from the primary stations at a site called Levan.

Figure 1. This map shows the locations of all TV translator sites in Utah and the “Daisy Chain” method that is in place for the local TV signals statewide. The circles indicate areas served by omnidirectional translator patterns and the fans show the directional translator signal paths. The big blue circle is the area that Salt Lake City primary stations cover. The red lines show the five sections of the state that were selected for technical purposes. Click here to see an enlarged diagram.

These signals are then relayed in two different directions. The path to Frisco Peak is 105 miles long and the other to Cove Mountain is 60 miles long. Microwave and translators relay the signals to additional mountaintop hubs, thus transporting the 8-VSB signals to all of the southwestern areas of the state. Other similar “hubs” feeding translators are located throughout Utah (see Figure 1).

In stark contrast to an analog translator, where the quality of the signal deteriorates hop after hop, DTV translators using regenerative transcoders can reconstruct the signal at each hop if necessary. They also have the ability to correct the signal back to perfect, regardless of how many times it has been repeated.

Currently there are no FCC rules to allow translators to rebroadcast digital signals. Utah TV translator coordinators requested permission from the FCC to conduct experimental tests with digital translators, and were allowed to document different methods of increasing usable spectrum. Translators need to become part of the transition to digital operation as soon as possible. The translator coordinators have been conducting these tests for the past 36 months, and have found that it is possible to use regular set-top box DTV receivers to convert the 8-VSB signals to analog for the translators. These conventional receivers convert the 8-VSB signal to video and audio, and then feed it into a modulator to drive a conventional analog translator. This dramatically improves the translator-input signal and viewers’ TV reception.

Figure 2. This diagram shows the experimental route from the primary TV stations in Salt Lake City to some of the areas in the central sector of the state as outlined by the map. It is meant to show how 8-VSB and improved local broadcast signals can be obtained for rural communities. Click here to see an enlarged diagram.

The digital microwave network in development will create a “backbone” system to transport 8-VSB signals statewide. With this, the Salt Lake City DTV signals will be available to all areas of Utah (see Figure 2). We have successfully transmitted adjacent channels 31, 32, 33 and 34 digital 8-VSB stations, adjacent to analog channels 35 and 36 on these translators.This has largely been the result of using microwave feeds, and finding new ways to allow the translators to operate on adjacent channels. The signals have consistently been viewed throughout the Sevier Valley area for the past two years. This area is 150 miles from the primary stations and serves an area four miles wide and 50 miles long, a total 200 square-mile viewing audience.

The results of these experiments have been documented and delivered to the FCC for the purpose of helping to provide data for the new upcoming DTV translator rules.

Two MRC 13GHz radios in northern Utah serve a site known as Pisgah Peak. The two transmitters are located in the valley near Brigham City, UT. Six over-the-air UHF signals are received directly at a distance of 60 miles from the Salt Lake City primary stations. Drake heterodyne channel processors are used to downconvert the TV channels to 3, 4 and 5. These three channels are combined with a regular three-way splitter and then interfaced into the 70MHz inputs on the MRC DAR Plus transmitters. These six 8-VSB channels are then relayed to Pisgah Peak 11 miles away.

At the Pisgah translator site, the 70MHz (channels 3, 4 and 5) output of the MRC DAR Plus receiver is split using a standard three-way splitter and then fed into consumer RCA DTC100 set-top box receivers. The analog video and audio outputs from the set-top boxes are then connected to standard Blonder Tongue NTSC television modulators. The appropriate outputs are then used to drive Larcan/USA model MX100 translators. This improves all input signals to the six analog translators located at this site.

The original direct, analog off-air signals are marginal at this site; the new digital signals are far superior in both picture and sound.

Another site, Levan Peak, is located approximately 83 miles south of Salt Lake City. At this location, two DAR Plus transmitters relay six over-the-air DTV signals to Cove Mountain 60 miles away and Monroe Peak 66 miles away from the Levan Site. The Cove site is 8750 feet above mean sea level (AMSL) and the Monroe Peak site is an 11,220-foot AMSL. Cove and Monroe are nearly in-line with each other when plotted from the Levan Peak site. The two sites are only about 1.5 degrees apart, which allows DAR Plus transmitters to feed the two different receive sites. The three-channel configuration of the two microwave links is similar to what is being done for Pisgah Peak, except for the use of Zenith transcoders or remodulators. These devices are used to correct any bit errors or other degradation in the 8-VSB signal, and also reconstruct the signal back to studio quality before the 8-VSB is fed to the input of the microwave transmitter.

The University of Utah has been working on an MRC microwave system that transports 8-VSB to communities located in northeastern Utah. It is also using MRC microwave transmitters to send 8-VSB programming to the southwestern section of Utah. The path from the Levan site to the first mountaintop is 105 miles long, crossing dry-lake salt beds. Improved television is now being delivered to the viewers in an area some 350 miles from the primary stations.

What the future holds
Utah’s TV translator coordinators envision a statewide microwave network capable of providing a minimum of nine 8-VSB channels to provide feeds for analog and digital translators and cable headends. Different equipment options are being developed that can be used to interface with the microwave transmitter and receivers of intermediate frequency (IFs). These options include low-cost processors, which do not provide any correction to the incoming and outgoing signal, and higher-cost improved systems that will also provide pre-correction, correct clock jitter and insert station identification. All of these corrections will be needed in a highly reduced spectrum crunch.

The timeline for the state network is two years, and the microwave equipment now in place is only the beginning. Constant planning and working to expand the microwave network is time consuming. At this time, the timeline is contingent on two factors — finances and labor. Utah TV translator coordinators are hoping the financing will become available from either the Salt Lake primary stations or the state of Utah, because mountain construction time is limited to a five-month window, and many of the sites are well above the 7000-foot level. Without television translators, many people in rural areas of Utah and other states would not be able to receive free over-the-air television. In Utah, the support from state leaders and all of the broadcast stations is helping to provide the best television services possible to the entire populace.

Kent Parsons is the state of Utah TV translator coordinator.