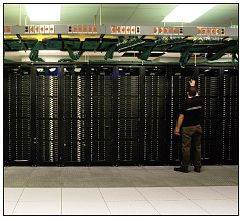 ALEXANDRIA, VA.
A fascinating change is occurring in the IT and data center space that may be extending into the broadcast space given thoughts of hubbing or distributed operations. The emerging concept of the "cloud" is possibly the most prominent trend in the IT industry, with at least one rationale being the "greening of the data center."

Today's growing focus on both green-IT and the cloud is more than just a trend fueled by the watchful CFO eyes. It is clear that green philosophies must be worked into all future business models. An example of approaches to greening up the broadcast facility was previously covered in "Looking Toward the Green Blades of Servers," (Dec. 2, 2008), where I pointed out that many facilities now employ a plethora of discrete PC-based workstations as utilitarian components or communications interface buffers. If the broadcaster looked to blade server technologies for those simpler utility-grade applications, the number of PC-workstations could be boiled down considerably. Blades emphasize compactness and reliability while reducing the physical and the carbon footprints left behind by employing efficient power, cooling and product consolidation.

In a somewhat yet-to-be-recognized outcome, the broadcast server marketplace has adopted a similar attitude through the use of more efficient storage components, consolidation of channels, and improved encoding/decoding system architectures. Over time, a huge reduction occurred in the physical space requirements for both storage components and video serving engines while simultaneously realizing increased performance and storage capacity many fold. Manufacturers have taken a serious look at the green issues in their products, but surprisingly have yet to make it major thrust in their marketing "green," like their data center counterparts have.

From the evolutionary side, hard drive capacities during the videoserver's infancy started at 4 gigabytes in a 3.5-inch form factor. Today, most mission-critical videoservers employ at least 73 GB drives, and average in the 146 to 300 GB range for a Fibre Channel or SATA drives. Many are looking at terabyte size drives in the same form factor. The efficiencies gained by storing 1 TB of data on a 7,200 RPM one terabyte HDD yields a 94 percent improvement when compared to storing it on 15,000 RPM 73 GB Fibre Channel drives.

In the emerging digital signage or "appliance-based" video serving world, both solid-state drives (i.e., Flash or SSD) and tiny microdrives in the sub 2.5-inch profile are employed. With space requirements now seriously reduced, so comes a reduction in power and cooling requirements as well, with a byproduct being substantial reliability increases.

The discussion of power consumption among hardware manufacturers is growing exponentially. When a system reduces the power consumption, the impact on the power supply system becomes logical. Less power means a physically smaller power supply, which in turn means less heat and space requirements, resulting in fewer materials used in fabrication.

For an historical example, the original Tektronix PDR100 took 5RU of space for four channels and included eight 4 GB RAID drives consuming 750 watts total power. The PVS1000 system took 6RU, plus 3RU of RAID for 8 channels and consumed 430 watts. Adding additional drives in an external array drove the total power consumption to 822 watts. Through evolution, this product line became the Grass Valley K2 platform—taking only 3RU for four channels and a power draw of 500 watts (with 10 internal 300 GB HDD). The newest K2 Summit takes up 2RU and consumes about 300 watts.

Harris' Nexio AMP platform evolved by adding feature sets in a like-chassis footprint, thus improving the green impact from both the space and power consumption perspective. Nexio, originally ASC, then Leitch, was not unlike Tektronix which became the Grass Valley Profile in their concepts of integrated drives and serving engines. Through evolution we have seen these platforms migrate from self contained to discrete components, and then back to self contained products again. Efficiencies gained are dependent upon many undercover green initiative byproducts.

When looking strictly at hard drive power consumption, the one component which requires the most power to operate is the actuator arm. As a result, a conventional HDD will reach its maximum power draw when the controller requests random data that is distributed all over the physical drive surface (the medium). When sequentially accessing contiguous sets of data blocks, which is the case for long media files written in a linear fashion during the ingest operation, a HDD will not require much more than the idle power, as there is no energy-intensive acceleration and deceleration of the actuator.

Another solution to the green IT initiative which flows into recent broadcast video products is the trend toward flash memory (aka "solid state drive" or SSD) as an alternative to the spinning hard drive. While flash memory is certainly not new, it is moving up to a new tier in the storage echelon. Flash is much faster, but today is considerably more expensive. This will change, and as the rate of price declines, the technology will become strategic in consumer devices, entertainment equipment and other embedded IT systems. Key to its practicality and success is its reduced space and heat requirements, plus its performance and ruggedness improvements.

SeaChange's green approach employs Flash memory in their "Flash Assisted Disk Technology (FAST)" which entirely replaces the disk drive elements, permitting a much faster, more reliable and environmentally friendly system. Long term reliability is just one of the important take home points of this technology. And with Flash, the total risk of a disk drive failure is obviously eliminated, which equates to a 100 percent improvement in the annual failure rate (AFR) vs. spinning media.

Omneon, too, has continued to look at heat and power requirements, further focusing on condensing more channels of I/O into a small chassis overall. While Omneon pointed out they've not yet seen the pressure to move toward Flash technologies, they have, like other server manufacturers, seen some movement toward the adoption of MAID (massive array of idle disks) which employ a "spin down" mode when demand for data subsides for long periods of time. MAID technologies, designed as Write Once Read Occasionally (WORO) applications, are not expected to move into the online, readily available/readily accessible mission-critical applications generally required for broadcast play to air operations.

And to be left out, since many components used in broadcast facilities employ mainstream consumer product lines (monitors, PCs, etc.), new lessons are being learned across the marketplace. The consumer world is probably the most notable in terms of energy savings initiatives. Conservation boils down to not only the power supply and display, but directly into the storage components as well. As a reference point, the previous Energy Star Version 4.0 standard stated compliance when the hard disk drive consumed at most 7 watts in an idle mode—equivalent to 14 percent of the total PC power consumption when advanced CPU power saving modes were considered. Version 5.0 spec, effective July 1, 2009, now impacts computer devices more completely while addressing the portability issues of netbooks, thin clients, gaming consoles, notebook computers, and small scale servers.

Like the reshaping of the data center, the broadcast facility of today should not only be looking to save OpEx costs which extend the profit margin, but they must look to consolidation in terms of space, equipment and even physical location. A good approach to any green initiatives need not wait for a major project to occur. The use of Energy Star compliant products or direct LEED certification is getting more attention now than ever before. Awareness of these issues can help greatly when planning for growth or when looking at alternatives to downsizing the physical size of the facility for the digital economic era.