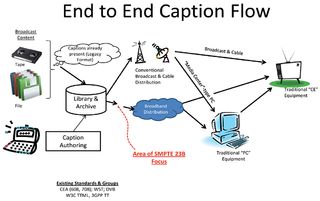 WHITE PLAINS, N.Y.—There's no denying that Internet-delivered video is indeed ubiquitous, so much so that even the standard-setting world has taken notice.

With an eye on widening the access of captioned video programming to viewers with disabilities, the Society of Motion Picture and Television Engineers (SMPTE) recently announced its SMPTE Timed Text standard is being offered as a de facto standard for broadband video.

The announcement comes as the FCC preps its rules for online captions under civil rights legislation known as the 21st Century Communications and Video Accessibility Act (CVAA), which works to ensure that people with disabilities have accessibility to broadband, wireless and Internet technologies. According to the U.S. Census Bureau, 54.4 million people reported some level of disability and 35 million reported a severe disability in 2005. The legislation requires that previously shown TV programs that are made available on the Internet must include captioning data.

Known officially as SMPTE 2052, the closed-captioning standard provides a common set of instructions for authoring and distributing captions or subtitles for broadband video con-tent. Under the standard, content providers can turn to one method for providing captions, rather than developing custom approaches for different Web browsers or media players. Ac-cording to SMPTE the standard is media-device and media-player agnostic in an effort to address interoperability issues.

Fig. 1 depicts a simplified pictorial of the overall ecosystem of how captioning flows from authoring to end-device. Chart courtesy of SMPTE
"Traditionally [captioning] info has gotten lost or remained difficult to translate. This standard is a strategic effort to ensure that captioning is reliability carried over to broadband video," said Pete Lude, SMPTE president.

"There were a plethora of sites, each who had developed their own way of delivering video captioning over the Internet," said Ann Marie Rohaly, director of accessibility standards at Microsoft and the SMPTE chair of the Television and Broadband Media Committee. "That was a real challenge for content creators who had to reformat programming multiple times to take advantage of the process—a few of the companies said they had 50 different formats to deal with to get content out."

The development of the standard had been in process for about five years, spurred after a coalition of online firms ranging from Microsoft and Yahoo and AOL and Google formed the Internet Caption Forum to better deliver captioning online. "[The industry] saw that a industry standard was needed to ensure interoperability with all the pieces in the chain," Rohaly said.

"On the content side, the need is very acute," said Craig Cuttner, senior vice president of Advanced Technologies at HBO and chair of the SMPTE ad hoc group that created the standard. "There are hundreds of thousands of hours of content that is targeted for the Internet that the hearing-impaired community should have access to."

Added Jenifer Simpson, senior director for Government Affairs at the American Association of People with Disabilities: "This is an underserved audience that simply wants to en-joy the same kind of online and Web-enabled programming as the rest of us."

Organizations are applauding the move to make the SMPTE 2052 documents freely available. "We believe that this step will aid greatly in removing current online media accessi-bility barriers for those who have special needs, said Clyde Smith, senior vice president of Global Broadcast Technology at Turner Entertainment Networks and SMPTE Fellow.