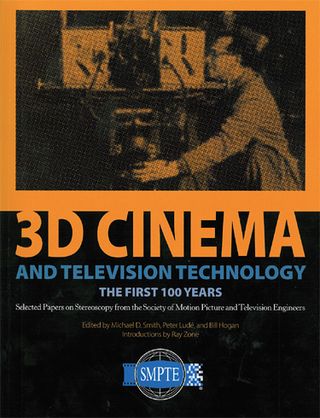 ALEXANDRIA, VA.—Capturing images in three dimensions has been around for a long, long time, and with the current interest by both cinema and television players, it's interesting to examine some of the technology and techniques used or suggested by players in 3D's far-reaching history.

The Society of Motion Picture and Television Engineers has been around for a long time, too (the organization will observe its 100th birthday in 2016), and has served as perhaps the largest disseminator of information on 3D.

SMPTE's recent publication of a large compendium of 3D papers should come as no surprise then, especially since its founder, C. Francis Jenkins, was a very early proponent of stereoscopic motion-picture imaging. The new 550-page book appropriately leads off with a description of a patent issued to Jenkins on July 5, 1898, "Device for Obtaining Stereoscopic Effects in Exhibiting Pictures," and follows this with the oldest 3D motion-picture paper published in the SMPTE Journal (then SMPE), Jenkin's "Stereoscopic Motion Pictures," which first appeared in the October 1919 issue.

REFLECTIONS ON THE STATE OF THE ART

The new SMPTE book doesn't stop with 3D history long past either. The final chapter in this massive volume (it's about the same size and weight of a ream of copy paper) is titled "Stereoscopic Imaging Evolves 1961—Present" and concludes with a paper from Lenny Lipton of taking 3D imagery into the digital cinema environment.

For the techno-historians in the crowd, the book is a must-have, as it includes reflections on the state of the art from such giants as Bell Labs' Herbert Ives.

Be advised that this is not the sort of book that you sit down with and finish in one evening. This thick tome contains more than 50 complete papers published in the SMPE and SMPTE Journals, as well as a number of "letters to the editor," discussions, and even reproductions of newspaper and other articles about newsworthy 3D events. It's organized into six chapters, with each focusing on a particular aspect ("Understanding Human Depth Perception) or period ("3D Takes Off 1951 through 1953"). It's not the sort of thing that you read in an orderly "page 100 follows page 99" fashion, but rather something that can be sampled here and there without really losing any of its essence. (I have to admit that I was initially drawn in to Raymond Spottiswoode's April 1952 paper regarding 3D exposition at the 1951 British Festival. Spottiswoode describes shooting some of the exhibition material with two three-strip Technicolor cameras lashed up side-by-side as "The special stereoscopic camera was not completed in time to shoot it with the Monopack Technicolor film, which had been planned." The thought of having to load, expose, and process six separate 35mm films to get 3D in color is rather mind-boggling in this day and age of handheld high-def cameras and solid-state memory cards; however that's the way it was done once upon a time.)

UP CLOSE AND HANDS ON

Equally impressive and worth visiting was the 1954 Jones and Shurcliff paper concerning projector synchronism, which shed some light on this reviewer's first "up close and hands-on" experience with 35mm film projection back in the early 1960s. I was a young teenager given a summer job and some rudimentary training on operating a couple of hulking Simplex projectors at a drive-in movie on the outskirts of town. I was concerned by the relative dimness of the images projected on the giant screen and applied my knowledge of photography and electricity to do everything I could to improve performance—all done on my own time (and risk), as I was only paid to project. Nothing seemed to help. Eventually I mentioned this to another projectionist slightly older (maybe 30 years) than myself, who replied, "Oh that—yeah, about a year after the drive-in opened, they took the motor-generator out and swapped with the one at the Saenger downtown." They were using two projectors at the same time to run 3D films and the set they had there couldn't handle the current for both of the carbon arcs. (After the 3D thing ended they never got around to swapping the generators back.) Reading the Jones Shurcliff paper certainly made me equally appreciative of what was required to keep a couple of projectors in sync 50 years or so ago. One of the units used only 18 tubes and five relays!

The SMPTE book isn't all about nostalgia spreading back 50 or 100 years either. The last paper (3D digital cinema) made its first appearance about a decade ago and is quite relevant to today's intermixing of television, stereoscopic imaging, and theatrical display.

While the SMPTE 3D compendium isn't exactly cheap—the soft-cover volume lists for $89—it's really a bargain when compared to what it would take to personally collect and/or copy the extremely wide range of 3D papers the editors have unearthed and reproduced. Also if you're a SMPTE member and order the book through the SMPTE website store, you get to knock $20 off the price tag. (That's a good incentive for joining SMPTE when you think about it.)

Bottom line—if you're the least bit interested in the 3D's progress as applied to moving images, you should have this book. You can learn a lot. Remember the old saw attributed to George Santayana that went something like 'those who don't study history are doomed to repeat it."

James O'Neal is the Technology editor for TV Technology.