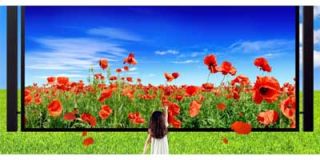 Because it uses only half the bit rate of MPEG-4, ITU says the new codec will considerably ease the burden on global networks where, by some estimates, video accounts for more than half of bandwidth use. Although much of the world is still using the MPEG-2 standard due to legacy equipment, MPEG-4, which has been available for the past decade or so, currently accounts for over 80 percent of all web video.

The drive by both the production and consumer electronics industries to adopt the next video compression standard has picked up steam over the past 12 months. Last May, the ITU issued recommendations for the standard and in October, the Consumer Electronics Association adopted the Ultra High Definition TV name (defined as displays with 8 million pixels) and the first generation of UHDTVs hit U.S. retail floors in October. By all accounts, UHDTV was the star of the International CES in Las Vegas earlier this month; the approval of the HEVC standard is a vital step in boosting availability of UHD content for consumer adoption.

UHDTV comes in several flavors: 4K upgrades current HDTV resolution to approximately 8 million pixels, while 8K quadruples the number to 32-33 million and is expected to be used in high-end digital cinema applications (and possibly the home, depending on the availability of content). Japan broadcaster NHK, a pioneer in the development of the standard, will show an 8K theater at the upcoming NAB Show in April. And although lower resolution content (such as 1080p, for example) can be shown on UHDTV with satisfactory results, HEVC video allows the sets to take full advantage of 4K resolutions and higher.

ITU-T’s Study Group 16 has agreed first-stage approval (consent) of the standard known formally as Recommendation ITU-T H.265 or ISO/IEC 23008-2. It is the product of collaboration between the ITU Video Coding Experts Group (VCEG) and the ISO/IEC Moving Picture Experts Group (MPEG). “ITU-T H.264 underpinned rapid progression and expansion of the video ecosystem, with many adopting it to replace their own proprietary compression codecs,” said Dr Hamadoun I. Touré, Secretary-General, ITU. “The industry continues to look to ITU and its partners as the global benchmark for video compression, and I have no doubt that this new standard will be as effective as its predecessor in enabling the next wave of innovation in this fast-paced industry.”

Al Kovalick, who owns Media Systems Consulting in Santa Clara, Calif., and is author of “Video Systems in an IT Environment,” and a monthly columnist for TV Technology (Cloudspotter’s Journal), said, “the progress in compression is amazing with introduction of H.265. Distributors of programming will be able to squeeze in about twice as many programs or deliver more video quality over the same bandwidth networks. This will ripple across all aspects of capture, production, delivery and archive. Just what our industry needs in the age of video everywhere.”

The new standard is designed to take account of advancing screen resolutions and is expected to be phased in as high-end products and services outgrow the limits of current network and display technology. Companies including ATEME, Broadcom, Cyberlink, Ericsson, Fraunhofer HHI, Mitsubishi and the aforementioned NHK have already showcased implementations of HEVC. The new standard includes a ‘Main’ profile that supports 8-bit 4:2:0 video, a ‘Main 10’ profile with 10-bit support, and a ‘Main Still Picture’ profile for still image coding that employs the same coding tools as a video ‘intra’ picture.

The ITU/ISO/IEC Joint Collaborative Team on Video Coding (JCT-VC) (formerly JVT) will continue work on a range of extensions to HEVC, including support for 12-bit video as well as 4:2:2 and 4:4:4 chroma formats. Another important element of this work will be the progression of HEVC towards scalable video coding. The three bodies will also work within the Joint Collaborative Team on 3D-Video (JCT-3V) on the extension of HEVC towards stereoscopic and 3D video coding.