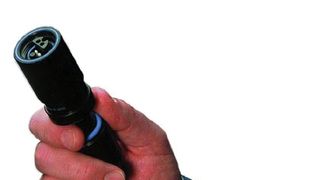 The SMPTE standard for mobile fiber optic interconnection is finally a reality, and fiber seems to be everywhere. Although it’s hard to believe, it has been more than twenty years since fiber optics first emerged in live remote television production. The first fibered remote events occurred in 1980 at the Democratic National Convention aired by ABC News and at the Winter Olympics in Lake Placid. Both of those events used rack-mounted optical transmitters and receivers comprising fixed video and audio links between static locations. In 1981, the first true mobile fiber remote broadcast took place when CBS News covered the second space shuttle landing at Edwards Air Force Base. That’s when the fun began.

Since that time there has been tremendous technological change, but the environment of the remote event remains as brutal as ever and places rigorous demands on both personnel and equipment. In those first days of fiber optic field production, we learned a lot — most of it the hard way. We learned that “suitcasing” a rack-mounted system was not practical or reliable, and that a portable fiber optic system must be designed from the ground up. We learned that fiber cable was only as durable as the jacket construction, and that the optical connectors had a long way to go before they could be considered survivable. The early fiber cables were not.

The very first fiber optic cables made in the 1970s, funded by the U.S. Army, were jacketed with Kevlar-reinforced, tightly extruded polyurethane, which is a tough, resilient material. While these cables were quite rugged, they were nearly impossible to strip without breaking the hair-thin glass fibers.

As fiber optics reached wider markets, these cables became more loosely constructed, using other materials like polyethylene for aerial and buried telecommunications cables, and PVC for indoor/outdoor local area networks. Unfortunately, they were not suitable for field use, since these materials were easily cut and susceptible to crushing. However, as the military funded advanced cable development for battlefield applications, variations on the tightly coupled polyurethane design were adapted for television field broadcasting. The result is a cable that stands up to all but the worst abuse on a daily basis.

In addition to the cable construction issues, the fiber itself evolved. The first fiber optic video links used large core but moderate-bandwidth multimode fibers. Today, the higher capacity single mode fiber predominates, primarily due to the high bandwidths found in digital video production and in some RF applications, such as triaxial camera links and broadband signal acquisition. Electronically, the fiber optic transmitters and receivers have graduated from AM to FM to digital modulation. Optically, we have advanced from low power LED sources to efficient laser diodes. Signal transmission now employs time-division and wavelength-division multiplexing instead of the noise-prone analog subcarrier audio techniques used in the past.

This graphic displays a 4-channel hermaphroditic connector from Delphi, which was approved as the SMPTE standard all-fiber connector.

From the very beginning, the fiber optic connector has been a limiting component in designing a field fiber optic system. The first fiber video/audio systems used a threaded optical connector based on the SMA coaxial connector. Since the alignment of mated fibers depended on the precision of a 5-mil (125-micron) hole drilled into a stainless steel ferrule, this non-keyed connector would routinely exhibit losses on the order of 3dB or more. Consequently the effective distance of a fiber optic link was severely limited by accumulated connector losses.

When the telecommunications industry made a wholesale changeover from multimode to single-mode fiber in 1981-82, a number of more efficient connectors emerged, including AT&T’s threaded, keyed biconic plastic connector, which was succeeded in the mid-1980’s by their keyed, bayonet style ST connector. The ST’s ceramic ferrule ensured nearly perfect, repeatable intermating of either multimode or single mode fibers, and became an important connector for premises applications.

The ST can be an effective field connector for a single-fiber cable, much like a BNC on the end of a piece of coax. Like a BNC, the ST is low cost, readily available from electrical distributors and easy to install in the field. Like coaxial cables, ST-terminated single-fiber cable assemblies can be barreled together to extend the cable run, but like coaxial assemblies, they must be protected from abuse or they will break.

However, for most field applications a multifiber cable is required. Typical are the 4-fiber and 12-fiber tactical military cables used in network news and sports remotes. Terminating these cables with ST connectors means fanning out the cable into up to a dozen individual fiber arms, creating a vulnerable 4- or 12-armed octopus. Inevitably, these relatively flimsy breakout arms break. Thus becomes the need for the multifiber connector.

At Telecast, we realized early on that the viability of our business depended on a reliable multifiber connector, and in the early 1990s there were only a few companies working on such a product. The leader was clearly Packard-Hughes Interconnect, a division of General Motors’ Delphi, and now called Delphi Connection Systems. Packard-Hughes developed a line of so-called hermaphroditic connectors for the U.S. Army, and these connectors were literally battlefield proven. The fit with Telecast’s mission was obvious: these connectors were intended to be deployed quickly under rigorous conditions by semi-skilled troops, and survive in virtually all environments.

A major feature of these connectors was the fact that they could never be deployed in the wrong direction; they were genderless. Unlike a triaxial cable, which has a male end and a female end, half of the hermaphroditic connector’s contacts are male pins and half are female sockets. The fibers within the cable cross over from pin on one end to socket on the other. Therefore, both ends are identical and the cable will always be pulled in the proper direction. Since two hermaphroditic connectors directly intermate, there is no need for couplers or barrels between cables. The Delphi connectors are rated for thousands of repeated matings without damage.

Individual ceramic pin and socket ferrules can be “ultra-polished” to a rounded tip to reduce back reflections, which are a common cause of problems in high bit rate and RF transmission. Mating ferrules physically touch together, eliminating reflective air gaps found in non-contacting designs, such as expanded beam window type connectors. Typical losses are less than 1dB per mated pair.

Over the last eight years, the 4- and 12-channel versions of this connector have become the de facto standard for mobile broadcast fiber optics in worldwide network television news and sports organizations. As a result, the 4-channel hermaphroditic receptacle is becoming a common sight at “prefibered” venues, ranging from the White House Press Room to auto racetracks and major league baseball stadiums. In April 2001, Delphi’s 4-channel hermaphroditic became the first all-fiber connector to comply with the Society of Motion Picture & Television Engineers (SMPTE) Standard 358M-2001.

Spurred in large part by the burgeoning demand for high bandwidth digital television, the role of fiber optics in mobile field production is growing rapidly. The assemblage of all the right parts was a joint effort by several key manufacturers. The creation of the standard was the result of years of field experience by hundreds of forward-thinking broadcast professionals. And now, the long-awaited definition of the standard fiber optic connector points in a clear direction for broadcasters and venue owners, alike.

Richard A. Cerny is the president of Telecast Fiber Systems.