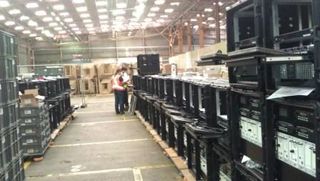 ClearCom Venue Systems are pretested at the LOCOG warehouse
At a big event with dozens of venues such as the London Games, flexibility ranks right up there with quality and reliability in the “must have” troika needed in a supporting technology.

This becomes obvious when you consider the architecture of the rowing venue, one of the more complex sprawling designs. Here, the course was about 2 kilometers long, with Clear-Com V-Series keypanels at the start, the finish, and midway though the course. Wired HelixNet beltpacks were also all over the course. This type of venue would require some long-distance fibre runs between panels and between panel and the matrix, and a mix of IP and traditional connectivity.

“Nothing is identical venue to venue, and that was our hardest challenge,” said Mark Bonner MD of Delta Sound Inc., which is part of the ST delivery team, which handled the event talkback at all 42 venues. “Every design is different, every seating configuration is different, all the initial designs that had been planned have been changed at least a bit in the actual construction.”

In these situations, with scores of configurations and users with different needs at each venue, the flexibility of the Clear-Com comms infrastructure became obvious. “It’s immensely flexible,” said Bonner. “It has fantastic capacity, and the fact that you can link buildings and add panel locations anywhere is key.

“Being able to put a V-Series IP panel over an existing IP network or on a dedicated V-Lan, and the ability to access the ECS software in the matrix via a laptop from any location is very useful.”

He added that venue infrastructure — an existing RJ45 patch system, or just the network of fibres already linking multiple locations — could be used.

Most venues had direct 4-wire connections between panels and matrix. “These were still flexible as they could still use an existing RJ45 infrastructure ... the IP range was used in larger sites, when it became more complex,” said Bonner. IP Panels were used in conjunction with Voice 2/Optocore units.

V-Series panels have two types of connectivity; they can connect to the Eclipse directly over or via IP, or using either a Clear-Com Voice2 device, or via interface units from Optocore, part of a partnership arrangement. “Having the ability to use the same panel, IP or direct, by just changing a connection via the socket you plug in to on the unit, makes it far easier than having to have two different styles of panels or interfaces,” said Bonner.

The equipment count for ST/Delta/PA People was intense, with some 45 Eclipse matrices at the core, one at each of the 42 venues and three never-used units held as spares. Approximately 300 V-Series control panels and about 500 beltpacks — mostly Clear-Com’s new HelixNet in a 4-channel wired configuration — were used.

Bonner said Delta was a HelixNet beta user for the last year or so, and the company “fell in love with” the digital partyline system. Without the HelixNet the distances could not have been managed, he said.

“And the fact that you can use four channels in a beltpack is big,” he added.

How could the four channels be used? “On a single XLR cable you have four channels selectable by the user ... so on the same cable run one user can have show and stats, and the next guy down the line might have video and spotlight operations.”

The fact that HelixNet works off of mic cable is important for a rental company like Delta, said Bonner, as it avoids a possible investment in new types of cable. “Also HelixNet can be run over Cat-5 or -6 with some adapter cables, making it even more flexible.”

Setting stadium talent IFB
Moving forward, Bonner said that HelixNet would be the future of communications for Delta, and he looked forward to the fact that the pack will be IP addressable in the future. He said the master-stations will be able to link via IP very soon. “This then gives us the ability to link master-stations in different parts of the site via IP, and will also allow multiple units to be linked so the number of channels will increase to either four, eight, 12 or 16, making it an even more power-full tool.”

Bonner added that the Eclipse could actually do far more than was asked of it in London. Also, Tempest2400 was never used in its wireless configuration because regulatory authorities had big concerns over RF interference in London during the Games period.

As for reliability, the three spare matrices that had been strategically placed in depots around Great Britain never saw any use. Clear-Com did have multiple engineers on site for support for much of the Games.

“Clear-Com took on a massive commitment to support this effort,” said Bonner.