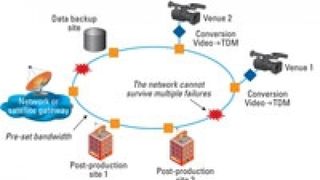 Broadcasters, as well as film and television producers, face the common challenge of efficiently transporting high-bandwidth video content over existing networks while maintaining the highest levels of availability. The smallest downtime while broadcasting a live event has serious consequences on advertising revenue and viewer experience. While availability is of vital importance in the broadcasting industry, the ability to transport high-quality video content efficiently is equally important. Broadcasters are constrained by short-range microwave services and costly satellite services, which offer subpar reliability, latency and service quality, while film and television studios are hampered by terrestrial leased-line services and router-based networks that are not suitable or robust enough for HD video delivery. This article describes how an intelligent optical network increases the survivability of broadcast networks and provides efficient and cost-effective transport of high-quality, advanced video content.

Meanwhile, the demands for new HD and 3-D video capabilities are growing rapidly, creating additional transport challenges. HD and 3-D video are driving significant increases in bandwidth demand that cannot be mitigated through compression because compressing HD and other high-end video results in a loss of signal quality and adds cost and complexity to the network. Addressing these issues, while minimizing the risk of service disruptions, requires a new network approach: a highly survivable intelligent optical infrastructure.

Those who use conventional satellite services have realized quickly that this medium is expensive and fraught with limitations. Satellite uplink/downlink delays can cause unnatural pauses and “talk-over” that impede live interviews. Poor weather conditions can impair satellite feeds, and scheduling transponder time is inconvenient and inefficient.

Distance is another challenge for television and film studios because they rely on geographically dispersed teams to assemble and edit content. A team in one facility may specialize in dialogue editing; another in a second location may add music tracks; and a group in a third city may generate visual effects. Sharing HD content securely and efficiently over hundreds or thousands of miles is a challenge video broadcasters and producers have to overcome.

An intelligent optical network has a significant positive impact on the video transport network.

In the video broadcast industry, uptime, video quality and operating costs are among the main business imperatives. Film and television producers are in a constant search for a secure and reliable system to share high-bandwidth, high-quality video between geographically dispersed teams. The intelligent optical network enhances network survivability and protects it from multiple failures — a feature that current networks cannot match. The network infrastructure also allows content providers to deliver video in its highest quality while paving the way for a new generation of protocols, and leads to network simplification and cost reduction that set a new economic benchmark for video production and distribution.