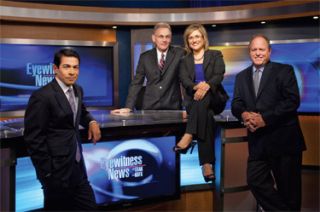 HAMILTON, N.J.—While major market TV stations were among the first to convert their local news operations to HD, the wave is now reaching into mid- and small-sized TV markets. Mid-market station managers tell us that meeting viewer demand for local HDTV news and weather was a key motivator, moreso than competitive pressure from other stations in their markets.

KTBS in Shreveport, La., switched its local news to HD on Oct. 14, 2010 along with sister station, CW affi liate KPXJ-TV.
Stations that recently converted their local news to HD also saw it as an opportunity to upgrade their infrastructure to a file-based workflow for greater productivity benefits.

At BMO Capital Markets, in Toronto, Ont., Technology Analyst Brian Piccioni tracks HD local news conversions by U.S. stations as an indicator of how key technology stocks, like Miranda and Evertz, are likely to perform. BMO publishes its findings in its "Local HD Transition Update" newsletter.

"Our research indicates that 44-percent of U.S. broadcasters producing local newscasts—roughly 313 of 700 stations—converted their operations to true HD from studio lens to transmitter," said Piccioni. "Most of these conversions occurred between 2006 and 2009. There were 71 in 2010 and 17 so far in 2011."

KTBS-TV, the ABC affiliate in Shreveport, La., was the first station in its market to offer full high-definition local news. After four years of planning, KTBS switched its local news to HD on Oct. 14, 2010 along with sister station, CW affiliate KPXJ-TV.

"There's no question that making this move has made our stations more competitive," said George Sirven, station manager for KTBS/KPXJ. "As the public increasingly buys HDTV sets, offering an HD product is no longer an option. With this investment, we're able to deliver what our viewers demand. This was also an opportunity to upgrade our infrastructure to a file-based, server-based workflow, increasing our production values with minimal resources."

The control room includes a Grass Valley Ignite HD automated production system with Grass Valley MediaFUSE for repurposing and multi-distribution of content; the newsroom is based on an Avid workflow, including ISIS server; and HD field and studio cameras are Sony. Sirven said, "Our new HD workflow is helping us realize higher productivity in our local news gathering and production."

Brian Piccioni, BMO Capital Markets In January 2011, KBAK-TV, the CBS affiliate in Bakersfield, Calif., became the first station in its market to launch local news in HD. KBAK also operates KBFX-CA as a duopoly and so this Fox affiliate also upgraded to HDTV at that time. The stations share the same local news team and studio, which produces 7.5 hours of local news programming between the two stations.

According to Teresa Burgess, vice president and general manager for KBAK/KBFX, planning for their HD local news transition began in 2008, not long after Fisher Communications in Seattle acquired both stations.

"Upgrading our local news to HD has boosted our standing in the market as one of the top news leaders, and viewer response has been overwhelmingly positive," said Burgess. "Many critical elements contributed to our successful HD local news launch, including significant capital investment by Fisher Communications, as well as support by many key vendors."

They replaced their open news set with a brand new news set designed and built by FX Group in Ocoee, Fla. The design challenge was they could not use call letters or channel identification on the news set. FX Group collaborated with Giant Octopus in Clearwater, Fla., a broadcast design company that developed the HD graphics package, resulting in a rich, unified channel branding look for the HD local news. The studio upgrade included nonlinear editing workstations and an HD automated production system (Ignite) from Grass Valley; upgraded HD news play-out from Bitcentral; and Panasonic P2 HD camcorders for HD field acquisition. The final piece, HD play-out, is planned for later this year.

WIS-TV10, the NBC affiliate in Columbia, S.C., launched its HD local news on Nov. 4, 2010. According to Craig Riker, chief engineer for WSYR, their videographers "are coming back with better looking video than we've ever had. We've got the best looking field video on air in the market." WSYR-TV also upgraded its control room, news sets, and studio lighting system, as well as added a file-based 720p HD workflow.

WIS-TV10, the NBC affiliate in Columbia, S.C., launched its HD local news on Nov. 4, 2010. As the news leader in its market, WIS-TV, a Raycom Media station, felt compelled to offer viewers a high-quality local newscast in HD.

According to Brad Neuhoff, news director for WIS, "Since most viewers watch local TV news for weather, we also created a First Alert Weather Center, with advanced, graphical HD tools for telling the weather story in a concise, visual way. Our goal is to win weather everyday."

The station upgraded its Weather Central system to HD, and weather graphics are displayed a 60-inch HD monitor called "the Bam." WIS meteorologists can also present weather from the First Alert Weather Center, with a multi-monitor backdrop. "We want to tell a compelling weather story, and our HD weather capabilities give us many different ways to do that," said Neuhoff. "The HD weather is also repurposed for our online and mobile services."

"Going hi-def also means paying more attention to the framing and aesthetics of each shot because viewers can now see everything in great detail," said Neuhoff. "While this HD transformation did impact production, being able to present high-quality HD newscasts is vital to remaining number one in this market."