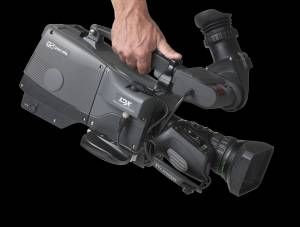 When Karl Schubert, CTO at Grass Valley, looks into his crystal ball for next year and beyond, he sees broadcasters and media companies around the world continuing an industry-wide migration to file-based and IP infrastructures, and manufacturers supporting that initiative with an increasing amount of software and networked platforms that allow users to work collaboratively and a lot more efficiently. The coming year will be filled with significant innovations at Grass Valley and a focus on connected workflow optimization.

“The advantage of software is that it allows us to get closer to realizing what the creatives want to do,” Schubert said. “At the end of the day, that’s what it’s all about for a technology vendor. The closer you are to hardware, the farther you are from the creative process. When we speak to customers about their creative goals, we find can show them how we can help do the same current work with less physical technology in front of them. They immediately become interested. Who wouldn't? As a company, Grass Valley is working hard to enable creativity. So, the tools do not define the task, but the other way around. That’s how we’ll keep our customers and help them migrate to the next best thing and allow them to increase their productivity and realize their business and creative objectives.”

Getting there in the next few years is a challenge that Schubert has taken on with enthusiasm and an understanding that budgets are limited in many cases, so the digital workflow transition might happen slower than some might expect. This is especially true, he said, in emerging countries like China and South America, where many broadcast and production facilities are just now being converted from standard definition to high definition operations.

“There’s still a lot of opportunity to move customers through the digital transition as painlessly as possible,” he said. “Our goal in 2103 is to accelerate that transition as much as we can by making it affordable and future-proof.”

To this end, Schubert is currently leading several R&D teams at Grass Valley that are focused on adding new levels of capability, in the form of software applications, across Grass Valley’s live production solutions and networked nonlinear editing platforms.

“I think we’ve reached a point where the costs are right and the performance is there, so you can use off-the-shelf hardware and take application-specific software to do most of the things that we used to do in custom hardware and proprietary gateware,” Schubert said. “However, there is a limit to this. There will always be a need for specialized hardware in some parts of a facility and the live production chain, where FPGA chips and real-time processing cannot be substituted. But the amount of dedicated hardware required is getting less and less all the time. That’s good news for our customers.”

Yet, he cautions that software can't do it all.

“There will always be something that creatives want to do that we can't accomplish fast enough on the CPU/GPU combination,” Schubert said. “However, as the CPUs and GPUs get faster, it creates room for us to move today’s requirements to software and perform more advanced processing in hardware. I think there will be a continual movement of function to the CPU/GPU combination platform.”

For Grass Valley, software-based products are faster to bring to market and can be enhanced with new versions on a continual basis, all to the benefit of the customer. Once a product line has been established in software, it’s also more cost-effective, in the long run.

“In our goal of getting closer to realizing what creatives want to do, Grass Valley will be moving, and has already started to move, from using only traditional tools to a combination of traditional tools and software interfaces that control those tools,” Schubert says. “What we’re working on now at Grass Valley are product lines that don't require huge infrastructure commitments. Our customers say they want technology whereby the infrastructure — having to deploy multiple servers, for example — does not get in the way, but is actually an enabler to do a specific task you’re trying to accomplish.”

Schubert said he’s focused on bringing the same flexibility that virtualization has brought to the IT world. He refers to it as an “abstracted infrastructure,” whereby the user does not care where their video server, or router, or video switcher is located, as long as they have access to the content.

“If you are able to run that function anywhere in your network,” Schubert continues, “you now have an enormous amount of flexibility. The infrastructure [physical systems] shouldn't be the thing that is stopping you from doing the work you need to accomplish.”

In 2013, Grass Valley is bringing this IT-centric concept to its current portfolio of solutions, at every level, from cameras to switchers to servers to edit systems and signal management and distribution.

This includes the ability to “send back to the camera what the camera is sending in to us,” Schubert said. “We can use fiber and IP networks to locate cameras remotely. This approach will allow creative to have an evolving vision of what they would like to see — and have us as viewers see — and realize it just moments after. We also see, over time, OB vans being built smaller, to accommodate smaller spaces and more limited budgets. This means a production company could send a smaller truck on-site but have many of the production tools located remotely, yet accessible and controlled from inside the truck.”

He added, “This mobility is critical to providing creatives with new ways to accomplish the same thing they have been doing for many years.”

The company’s new LDX series cameras are designed to accommodate continual software upgrades. The company is preparing to launch a new service that will see Grass Valley license specific capabilities on a basis of user need: per feature, timed, or pool of cameras. This central service would allow a customer to turn on a feature for a specific event while in the field, and then turn it off when finished.

“This is very powerful and is all made possible by Grass Valley’s new focus on a software-centric model,” Schubert said.

There’s a new feature button on the LDX cameras called “PickMe” that allows a camera operator to tell the director that he or she has a shot that is important. The feature allows the camera operator to tag his or her shot so that the director is alerted in the production truck, but the tagging metadata can also stay with the recorded content after the event is over. The camera operator can also mark clips that can be sent directly to the Internet to give viewers at home an alternate view of the action (or a different take on a news story). Again, it expands the creativity of the operator. That’s never been possible before.

“We’re designing the next generation of systems for mobile production, based on where we see the industry going,” Schubert said. “With distributed, nonlinear production, people working on a particular project don't have to all be in the same place. In another five years, when cloud computing becomes truly useful for our industry, this will be the common way to do remote production. It makes both practical and business sense to do it.”

Redefining the way we do television with nonlinear production

Then there’s the Grass Valley STRATUS Media Workflow Application platform that acts like a workflow manager and provides a common interface for creative people that don’t want to be encumbered by technology. This platform is helping to change the way people think about nonlinear production by facilitating the idea that content can be developed and distributed by multiple people simultaneously working from different locations. This allows collaborative teams to create all kinds of content for different distribution platforms.

“In the old days, linear production required a single person to custom edit everything,” Schubert continued. “That was time-consuming and resource-intensive. Now content is stored digitally and made available to many people on a network. They can collaborate on that same file and be much more productive. There really are no limits as to how a program or single piece of content is put together or distributed.”

“In the past 50 years, Grass Valley has developed and marketed a wide variety of new technologies, but television programs are still generally made in the same way they always have been,” he said. “What we’re talking about today at Grass Valley is changing the way TV is made. This goes back to what we call the ‘new era of nonlinear production.’ Today’s professionals are coming from a wide variety of backgrounds, not just traditional broadcast, so the tools they require have to be flexible.”

In 2013, Grass Valley will continue to develop the same robust, reliable systems that the industry has come to depend on, Schubert said, but he’s also trying to shift mindsets away from what has always been done.

“We want people to envision a future where they have more freedom and can launch new services and more channels quickly and cost-effectively,” he said. “We’ll still make great production switchers and routers and the rest, but these traditional tools will be tightly integrated with newer software tools that bring more capability in the same or even smaller amount of space. It has taken (and will continue to involve) a lot of research and development investment on Grass Valley’s part to make this system-wide, product re-tooling move, but we know it’s worth it to preserve our customers’ future.”

He added, “The whole idea of this new path that we are on is that we need to connect the newer things we’re developing to our existing systems. You can buy a basic-level Kayenne switcher today, for example, and then add new features and capabilities in software to enhance that product and preserve your investment. It’s really about giving customers more for their money and allowing them to decide when to upgrade. That’s how you stay competitive as a technology vendor.”