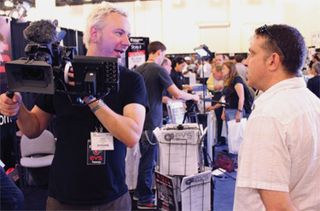 NEW YORK—DV Expo is returning to the east coast and co-locating a new exhibit with SMPTE's 2nd Annual International Conference on Stereoscopic 3D for Media and Entertainment. DV Expo East, June 22, will give attendees access to a shared exhibit floor and provide exhibitors the opportunity to show their wares to a broader range of video professionals.

DV Expo East will take place on the third floor of the Millennium Broadway Hotel at 145 West 44th Street in mid-town Manhattan, and is a free, full-day event featuring technology exhibits from the industry's leading suppliers, keynote speakers, educational sessions, and networking events. Interested attendees can register online at www.dvexpo.com/east.

DV Expo East and SMPTE's 2nd Annual International Conference on Stereoscopic 3D for Media will be held at the Millennium Broadway Hotel in mid-town Manhattan.UNDER ONE UMBRELLA

NewBay Media's 2011 DV Expo East is an expansion of DV Expo West held every fall in the Pasadena Convention Center, in Pasadena, Calif. The first DV Expo East was held in New York City in 2007.

The SMPTE conference will be held June 21-22, in the Hudson Theater on the first floor of the Millennium. Early-bird registration rate for this SMPTE Conference, $559 for SMPTE members and $699 for non-members (until May 18), includes a free, all-access pass to DV Expo East. (The link to the online registration site can be found at www.smpte.org.)

DV Expo East will accommodate 37 6x8-foot exhibit booths on the show floor, and at press-time Trabb expected that space to sell out. Since the SMPTE Conference anticipates 300 attendees and DV Expo East expects 1,200, Trabb estimated that the shared exhibit hall would attract close to 1,500 video professionals.

More than 300 broadcast and motion picture professionals from 17 countries attended last year's SMPTE International Conference on Stereoscopic 3D for Media and Entertainment, the first conference of its kind, held at The Marriott Marquis in New York in July.

While that conference did not have a technology exhibition, Barbara Lange, the executive director of The Society of Motion Picture and Television Engineers (known as SMPTE), in White Plains, N.Y., wanted to add an exhibition to this year's conference. And co-location with DV Expo East—already planned for the same hotel and timeframe—presented the ideal opportunity for SMPTE's attendees to visit DV Expo's equipment exhibition and for DV Expo's vendors to reach two different segments of the professional video industry at a single event.

"There are many logistical benefits to our cooperation with NewBay Media and DV Expo East," said Lange. "It's easier for busy professionals to attend two events under one roof, and less expensive for vendors to reach two distinct audiences with a single exhibit. For those attending NAB and other shows, this SMPTE conference offers a look at cutting edge research and developments shaping the future of stereoscopic 3D and other valuable content not readily found at other industry events."

This year's SMPTE conference offers four sessions during which top researchers and technology experts will present their latest findings in papers and presentations. Howard Lukk, vice president, digital production technology for The Walt Disney Studios is serving as the chairman of the program committee. Lukk oversees the program selection process, including evaluation of proposed papers from around the world and finalizing the roster of speakers.

The two-day event is divided into four sessions:

Stereoscopic 3D and the Human Visual System will discuss a better understanding of the way humans perceive stereo 3D images that can help solve the problem of headaches, nausea, and fatigue commonly associated with watching stereo 3D."

Stereoscopic Image Acquisition will explore the latest advancements in all types of stereoscopic image acquisition including in-camera as well as creating the illusion of 3D depth within the computer graphics environment.

Advances in Stereoscopic Display will explore the technology trajectories of stereo 3D display devices for theatrical and home entertainment systems, including the use of holograms and whether we can or should lose the 3D glasses.

"It's vital that cinematographers, cameramen, and producers begin contemplating what stereo 3D advancements are on the horizon and how they can use them in their craft," said Lude. "This conference also gives a critical heads-up to technical executives from the broadcast television and motion picture industries who are in the process of developing three-to-five business plans for new entertainment products and services."