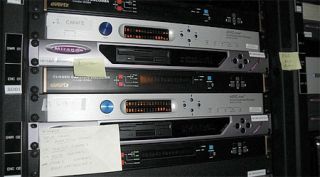 JOHNSTON, IOWA: It wasn't a dark and stormy night, Wednesday, Dec. 15, 2010. In fact it was quiet in the White House... almost too quiet, but things were going to get a lot quieter. President Obama signs the Commercial Advertisement Loudness Mitigation (CALM) Act and starts the clock ticking on regulations to protect consumers from loud commercials. The act gave the FCC one year to develop the regulations and methods of determining violations and enforcement procedures. A year later, on Dec. 13, 2011, the commission released its Report and Order adopting the rules and regulations associated with the CALM Act and started another clock giving all concerned parties one year to take the steps necessary to become compliant with the law and the methods for demonstrating compliance.

IPTV's audio processing system includes Linear Acoustic Aero.air Audio Loudness Manager on the HD stream and two Aero.one's for SD streams. I would encourage everyone to read the both the CALM Act and R&O 11-182 at the FCC web site. Read the latter because a good understanding of the requirements will help greatly in making the correct decisions. Read the former because there just aren't too many laws passed that are less than two pages long.

To be completely candid, at Iowa Public Television, loud commercials have never been much of a concern. And I am not making the point that we're non-commercial, we do have sponsors and we air spots that we call interstitials. For better or worse, our sponsors want to be viewed as part of the program they are underwriting rather than stand out from the program. The transitions tend to be much softer and more focused on flowing seamlessly from program to message to try and hold the viewers' attention.

I am not an advertising or marketing person but the sense I get is that if someone has just watched and enjoyed a program, they have a good feeling about it and the sponsors want to have that good feeling transferred to them by the association. Falling back on my old disc jockey days, it's like executing a smooth segue where the listener doesn't realize that the song has changed until they are already engaged in the new song. By contrast, commercial advertisements seem to want complete separation from everything around them so that they are viewed as a unique individual. Kind of makes them sound like teenagers looking for their individual identities.

Anyway, at IPTV we have been looking at this for some time. Like most stations, we have a shrinking staff and we looked for ways to be compliant that could be implemented as simply as possible. We multicast, so the solution had to be able to handle our primary high definition stream and our two standard definition streams. Adding to the mix is the fact that we are beginning to do some productions in true 5.1 surround sound. After many demonstrations, conversations with other engineers and tests, we decided on a solution from Linear Acoustic including the company's Aero.air Audio Loudness Manager on our HD stream and two Aero.one's on our SD streams.

Starting with the Aero.one, since the two SD channels are stereo only, we went with the TV model which offers dual stereo processors. Since much of our programming includes either SAP or video description information, each stream needed a unit. Down the road we can see a time when both services will be required and having the four channel audio capability really added to the value of the units. Another feature that was important to us was the 5.1 downmix that happens automatically. As I stated above, we pass and produce 5.1 surround material for our primary HD channel. Much of that content also gets played on one of our SD channels and the downmix capabilities allow us to use the same stored program from both the HD and SD playbacks without operator intervention.

The Aero.air on the HD stream and the Aero.ones both offer automated loudness control which in our environment is important. As I stated earlier, we have never really dealt with a loudness control issue and given our environment, I don't expect that will change. But one never knows and in the event that something does happen, the Aero.air has the processing/limiting capabilities to correct the error. Now my purist friends all tell me that if you get the metadata right, this capability is unnecessary and in fact changes the integrity of the sound. My experience is that getting the metadata right is a big "if," especially when dealing with content from multiple sources delivered as files. The added security of the more traditional limiters incorporated into the boxes is a good safety net when considering the procedures required to deal with an FCC complaint issue.

Probably my biggest act of audio heresy is the fact that we have the Aero.air set up to upmix anything that isn't true 5.1. I was extraordinarily skeptical about doing this. I worked for an NBC affiliate in Honolulu when we converted to stereo and went through a couple of iterations of stereo synthesizers. They were horrible; BTSC stereo separation wasn't all that great to begin with and the synthesizers made it even worse. But times and technology have changed and I have to say that the upmix capability in the Aero.air is pretty amazing. I have spent a good deal of time with some local electronics stores listening to the upmixed 5.1 and more importantly, listening to the downmixed stereo from the upmixed 5.1. I will not try and convince anyone that it is true 5.1 but it is very good and for people who have 5.1 systems, the upmix that comes from the Aero.one and is processed by their home systems as true 5.1 sounds better than any home system's upmix of stereo source material. At least any of the ones I have listened to.

So what is next for digital audio? I am hoping that a serious look at synchronization will take place. I have already started working on acronyms for the system. It will be great when television audio is CALM and COLLECTED. I may need help on the latter.