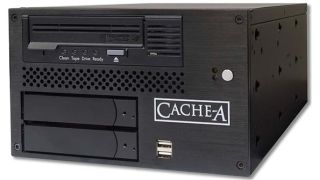 Cache-A has launched the first in a new generation of LTO-6 archive appliances. Available immediately, these appliances meet the media and entertainment industry need to safeguard ever-increasing volumes of priceless assets at minimal cost, while delivering state-of-the art tools and performance for reliable and future-proof archiving.

LTO-6 technology is now available across Cache-A’s Pro-Cache6, Power-Cache, and Library 24/48 automation systems. The desktop Prime-Cache6 appliance is anticipated to be released around NAB 2013 (click for your product's free NAB coverage!).

To accommodate in capacity increase, Cache-A has increased the internal disk cache storage in its appliances.

They can be network-attached, making them easy to deploy in professional digital media workflows.

LTO-6 is the sixth generation of Linear-Tape Open (LTO) technology. LTO was launched in 2000, and LTO tape has a shelf life of at least 30 years. With four million tape drives in use, plus more the 200 million cartridges sold worldwide, it has proven the most economical and safe long-term storage technology for the IT and media and entertainment industries.