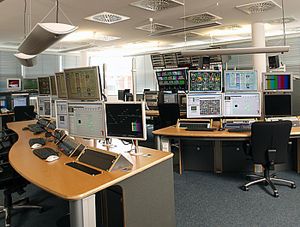 At PLAZAMEDIA we have relied on Omneon Spectrum media servers for ingest and playout since 2004, and in that time we have come to appreciate their absolute reliability.

As we planned our shift to tapeless IT-based operations, the first such transition in Germany for a company like ours, we elected to build our central distribution platform on Omneon’s MediaGrid active storage system. We specialise in sports television production, and we installed the Omneon MediaGrid at the heart of our state-of-the-art ’eCentre’ to support an efficient, cost-effective workflow enabling provision of quality broadcast content for PLAZAMEDIA clients. The unique processing capabilities of the MediaGrid system, its flexible interoperability, and its huge capacity made it the perfect fit.

We began construction of the eCentre in 2006 with the aim of streamlining our operations, seeking to make them more cost-effective, scalable, and flexible in order to improve service for clients, and enhance clients’ ability to produce programming that’s both polished and timely. We worked with systems integrator Netorium and Vision 5 Media to design a workflow in which content – provided either via tape, satellite feed, or file – could be ingested to our existing Omneon Spectrum servers under the direction of Blue Order media asset management, and then sent or imported to a redundant 2x 24 TB MediaGrid system for secure, resilient central storage.

The Omneon ProBrowse application not only supports enterprise-wide viewing of stored media, but also allows the MediaGrid system to take an active role in generating browse proxies while content is still being recorded. These efficiencies are particularly valuable in a time-sensitive environment, when deadlines are tight and editors are trying to make fast shot selections, as they must for highlights reels and analysis after a match, for example.

To facilitate rapid editing, Marquis Medway directs the MXF IMX 50 files on the MediaGrid to and from an Avid editing system. Once the package or program is finished, the Omneon ProXchange application transcodes designated files into MPEG LGOP format for playout. Our MediaGrid system also interfaces with EVS servers used for live sports production and with an SGL tape library that acts as a deep archive.

Operating together, the combination of new and existing Omneon storage systems and software applications serve as a scalable platform that supports PLAZAMEDIA’s future growth. We have experienced continued reliability, and the system’s seamless integration with third-party applications has allowed us to leverage all our systems more effectively, and we have also realised benefits including the ability to effortlessly work in a mixed-format environment.

PLAZAMEDIA currently transmits 19 simultaneous channels around the clock and up to 60 transmission channels during live sports production for our top-tier clients. Every service you can think about in media production, we offer on a file-based platform. With our new eCentre, we are able to provide our clients a solution that addresses all aspects of file-based production, from ingest through to archiving and distribution. Because the eCentre is HD-ready, we’ll be prepared to make the 2009 migration to HD along with German broadcasters.

Chris Wieland is Director of Technology for PLAZAMEDIA.