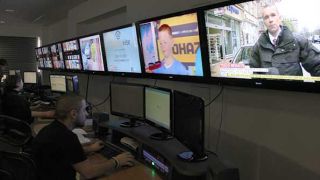 ABS Broadcast, based in West London, handles channel management and playout for a number of broadcasters, transmitting to the UK and beyond, with an increasing number of channels going to India and South-East Asia. With more than 20 years’ experience servicing the broadcast industry ABS was the first server-based playout facility in the UK, and has a long history of early adoption of new technologies in the sector. It identified the need to drive efficiency but, more importantly, to also provide an enhanced service offering to its clients with access to stored content to help them better monetize their assets.

“We were already somewhat familiar with the Grass Valley K2 Edge, as we have a number of PubliTronic channels on-air,” said Sass Jahani, CEO of ABS Broadcast. "Rather than a simple playout system, Grass Valley offered us a complete, integrated playout solution.”

This flexibility is seen as an important benefit to ABS Broadcast: “We are in a highly competitive business, and the ability to get new channels on the air quickly gives us a significant competitive edge,” added Jahani. “With K2 Edge, we can get a new channel on-air in as little as 24 hours.”