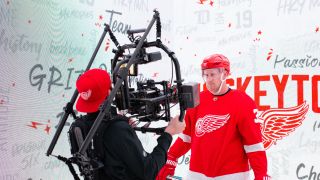 The ARRI ALEXA Mini camera was able to be mounted to a number of different setups for dynamic shots. (Image credit: ARRI)

DETROIT—As coordinating producer for the NHL’s Detroit Red Wings, my team is responsible for broadcast, production and content services that cover digital signage, crewing, in-arena experience, commercials, social media and beyond. Anything with cameras or screens, we probably have something to do with it.

In 2017, the Red Wings moved from Joe Louis Arena to the state-of-the-art Little Caesars Arena. We had used a RED system for “Farewell to the Joe,” a six-part miniseries about the beloved venue on the Detroit River. When it came time for our annual “Gladiator” shoot and the first Red Wings game at Little Caesars Arena, I rented a similar kit. However, colleagues began to explain the benefits of the ARRI system and how it could benefit the type of shooting we do daily. The next day I came back and swapped out the RED for the ARRI ALEXA Mini.

This was my first experience with an ARRI ALEXA Mini and the results from the production day, mixed with the footage captured on opening night, combined with the post-production workflow were enough to convince me that this is the camera system we needed. What I liked most about the Mini body style was the adaptability—the functionality and mounting styles really give it limitless possibilities as a camera. It’s nice for the “run and gun” nature of working in sports.

After using the Mini again in 2018 and 2019 for our Gladiator shoots, we took a longer look to see how we could benefit from having a Mini in our arsenal. The ability to fly through frame rates, the internal ND filters and various setups makes for shooting sports a dream. For our new behind-the-scenes series “The Winged Wheel,” we began filming the pilot with the ARRI ALEXA Mini LF, the large format version of the ALEXA Mini.

Along with the Red Wings show, we were able to flex the muscle of the Mini LF with the Detroit Tigers. For the first time, our internal crew produced the “Gladiator” shoot in Lakeland, Fla., at spring training and the results were stunning to say the least. We rented an Angenieux Optimo 17-90 with a 1.4x extender to cover the entire large format sensor. We were able to place players directly in front of the lens and capture these incredible moving portraits of each subject with the LED wall behind them, along with all the other shots.

This past year our department received the green light to invest in a significant amount of gear. We turned to B&H Studio for help in strategically developing our order and maximizing our budget. In the meantime, the Mini LF started shipping and B&H helped ensure we got all the little things needed to transition from Super 35 to a larger format.

Our decision to move from the ARRI ALEXA Mini to the large format Mini LF was a game changer for us. Large format has definitely been a warm welcome to my filmmaking style. The subjects have more depth and the ability to get close to them really makes for beautiful results. There are still things I enjoy about a Super 35 sensor, but overall I would say entering the large format world has been incredible.

Dan Mannes is coordinating producer for the Detroit Red Wings, and also works with the Detroit Tigers, Little Caesars Arena and other venues in the Detroit area. He can be reached at Dan.Mannes@hockeytown.com.