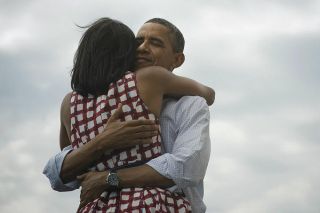 In a first for a U.S. presidential politics, President Obama used social media to thank the world for “Four More Years.” Even before he thanks his friends, loyal supporters or campaign workers, he “shouted” out to the world. And to my Twitter account.

Those three words were sent via the President’s Twitter account to me and countless others, and then many of us retweeted it more than 750,000 times (as of two days after the election). The tweet also included a picture of the president embracing the first lady Michele. It was all family friendly, no half-naked images here.

That tweet could eventually end up being the most-retweeted message of all time. Justin Bieber, with a message that was retweeted roughly 250,000 times, previously held the top spot. I’m hoping I tweeted my part to beat "the Bieb." When all is said and done, I’m confident we will.

For U.S. network and local stations, the most noteworthy part might have been that they could only sit back dumbfounded as the numbers of coveted “eyeballs” were watching something other than their Election Night programming. Perhaps these viewers were supplementing their TV viewing, but their attention was elsewhere. We've started to see reporters reading tweets and text messages on air, but it feels like second- and third-hand information. The live, interactive conversation is taking place online; somewhere else.

In earlier days of televion, a TV station dreaded it when a viewer chose another channel than their own, and did everything it could to reverse that impulse decision. Today, the entire broadcast industry is faced with a similar dilmena—that people are more engaged with another channel, and it isn't television—and no one has an easy solution.

Television is sanitized, edited, filtered and slanted one way another. The Twitter universe is mainly unchained and opinionated. That’s what appeals to so many followers.

The challenge for stations is how to allow viewers to get more involved in their newcasts. To do this effectively and in a timely manner, howver, risks getting punk’d by a political or special-interest party with an avalanche of tweets supporting or opposing a particular issue or person.

While someone other than himself no doubt reviewed the President’s tweet before it was sent, online followers got the feeling that they were talking directly to the President. Nearly a million people got that “Obama hit me up” feeling. In most cases, that’s never happened before either.

BTW, that photo of the First Couple received 3.3 million likes, 422,000 shares and nearly 160,000 comments on Facebook. According to a Facebook post on the company’s site for journalists, the photo is the most-liked post of all time.

Twitter also reported that its users sent out 31 million election tweets throughout the day Tuesday. Traffic on the network peaked when news organizations (NBC first) called the election for Obama, sending 327,452 tweets per minute at 11:19 p.m. That made it easily the most tweeted moment of the entire election.

OMG, I was watching the local WABC station in New York City on Election Night. As a reporter was talking on-air about a local election result, there erupted a cheer in the background as people watching other channels saw that the President had been re-elected. The reporter looked a bit sheepish as she hesitated to state the obvious.

“Other networks are reporting that the president has won re-election, although I’m not sure when our network will confirm that.”