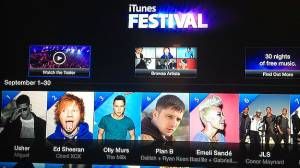 The problem with a lot of mobile TV programming is that it’s not special enough. Sure, you can get episodes of "Homeland," catch up on "Dexter," watch Sunday’s game live and tune in to your favorite reality show, but truthfully, you can get most of that stuff anywhere, and on most any set. There is some original programming on some of the mobile networks, but traditionally they are very niche or suffer from minimal marketing, so most people don’t even know about them. But what if there was a publicized event, that was more exclusive, that debuted on mobile devices? Apple’s iTunes Festival is just that, with a few twists.

The iTunes Festival has been running for several years now, but this year will be a bit different and will include Apple TV support as well as mobile. So the way it works is that in the month of September, Apple is live streaming performances of top musical acts. There are more than 60 artists performing on 30 nights from the Roundhouse musical venue in London. It’s a pretty big event, a big venue and a lot of diversity in the acts. How do you watch it? Just download the free iTunes Festival app from iTunes and install it on your iOS device, such as an iPad, iPhone or iPod Touch. You’ll see the schedule of who is performing on what days. And while these are reruns of the performances available for a limited time, make no mistake, this is a month-long live streaming event where you “tune-in” at the designated times.

This year’s twist is that the streaming is also available on Apple TV. If you have one of these units, just boot it up; the festival is already installed. You can watch all the live acts right on your big screen. Or you can use Airplay from your iPhone/iPad app and send it to Apple TV as well. That way, you can control the show from your mobile device and send it to your television. If you don’t have the devices, you can still check it out in iTunes, streaming live on your PC or Mac.

So why is this important to mobile TV? Because it’s a live event that is debuting on mobile, and it's something lots of content providers deploying to and planning on need to be made aware of. While Dyle and over-the-air is gaining momentum, apps are often how people these days interact with mobile TV, and much of that is streamed either live or via video on demand. The live aspect was a huge hit just a few weeks back, when NBC offered unprecedented Olympic coverage via it’s iOS apps. In fact, it broadcast everything, every event, all live, as it was happening. People who may not be interested in “watching TV on their phone” but who were most certainly interested in the Olympics watched in record numbers. The difference was with the Olympics most, but not all, of the live coverage was available on numerous NBC channels throughout the day. The iTunes Festival is different; it’s originating on mobile and it’s on these mobile TV devices that a majority of people will tune in.

Marketing-wise, it works in Apple’s favor. It can showcase lesser known artists and gain new fans, who will make purchases in their iTunes store. But the big picture is Apple is positioning live programming via its iOS devices, putting events you may want to tune in to right in the palm of your hand. And the more events it does, the more people will gravitate to its mobile platform and enjoy live TV that you can’t get on other devices or networks. As rumors swirl about the Apple branded TV that may be coming soon, some of its cards, especially concerning mobile TV plans, may already be on the table.