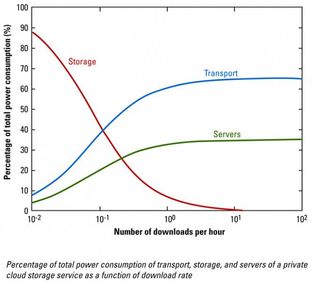 The cloud is widely proposed as the latest solution for at least three key media and business applications:

●Storage as a service (STaaS)

●Software as a service (SaaS)

●Processing as a service

In production and broadcast environments, all three applications are sometimes seen as viable answers to the needs of a fast-paced media production center. Even so, it’s the storage as a service product that is seeing the early application in the video production arena.

Storage as a service (STaaS)

Some common commercial products of STaaS include Instgram, DropBox and Carbonite. Professional STaaS services are available from Amazon with its Amazon S3, Microsoft’s SkyDrive and EMC’s Atmos, among others.

All of these products do pretty much the same thing; you upload your data and the company stores it. The services rely on users with a standard desktop, laptop or even a thin client to access to the data. If your application needs to store Exabyte’s of data these services can be helpful and inexpensive.

With storage costs dropping, one might ask why not build your own storage application and house the data on-site. The other side of that same coin is, “Why bother, let someone else handle the data.” There are several reasons pro and con to storing data locally. Without falling into a rabbit hole of arguments, they can be summarized as follows:

Why you might want to store your own data locally:

Why you might want to move data to an off-site provider:

No hardware upgrades or system management

A long debate can be had on each of the above points, but we will let them serve as their own a basis for discussion over this series of articles.

There is, however, an often-touted benefit of using the cloud for data storage and that is power savings. Broadcasters are only now becoming aware of the importance of controlling power costs. Moving forward, technical managers can expect federal, state and local government bureaucrats to increasingly drive companies to use less electricity. One proposed way to reduce electrical costs is to move large-scale data storage off site to a server farm.

A huge server farm may be more efficient, have newer servers consuming less power and operate with lower costs than can a local production or broadcast house—right? Cloud storage providers may tell you so, but the real answer requires a bit of investigation.

To get an idea of how cloud storage affected the operating costs of one large user, let’s look at a real-world example. In July, 2011 the General Services Administration (GSA)—announced it was the first federal agency to completely migrate its email system to the cloud. The company overseeing the project, Unisys, claims to have completed the move of 17,000 employees to Google Apps for Government. The entire system now runs on Google’s cloud-based storage and email system. The conversion process required just more than a year.

Google – GSA Storage as a Service

With regards to the GSA project, Google/s Senior VP for technical infrastructure, Urs Hoelzle wrote, “Last year, we crunched the numbers and found that Gmail is up to 80 times more energy-efficient than running traditional in-house email…Our results show that a typical organization can achieve energy savings of about 65-85% by migrating to Google Apps…

[For instance, the] (GSA), which recently switched its approximately 17,000 users to Google Apps for Government... We found that the GSA was able to reduce server energy consumption by nearly 90% and carbon emissions by 85%. That means the GSA will save an estimated $285,000 annually on energy costs alone, a 93% cost reduction.”

Not so fast Hoelzel says Tom Raferty, another energy expert. The truth may not be so simple and the fog of statistics may hide some other important considerations.

First, the GSA opted to farm out all computing to Google. The agency choose to not update its own servers and data centers. However, according to the above mentioned source, a 30 percent improvement in server efficiency could have been had by simply replacing 5-year old server technology with the latest versions.

Second, What is entirely missing from the above Google calculation is the cost of data transfer. For media applications, moving large files up to a cloud and down again involves three things; personnel time (transfer wait), electrical power for the local desktop/laptop and switches and maintaining sufficient storage in the cloud. As we’ll see, for applications that require repeated operator interaction with the data, transfer power costs are not insignificant.

Don’t forget the other costs

A recent report from Energy Facts Weekly suggests that cloud proponents may be fudging the facts when it comes to claiming just how “green” cloud computing really is.

In an August 22 report, the newsletter quoted from an IEEE Proceedings paper, Green Cloud Computing: Balancing Energy in Processing, Storage and Transport, “…under some circumstances cloud computing can consume more energy than conventional computing on a local PC”. A pertinent question to be asked is what are the “circumstances”? In a series of articles we are going to examine more closely the claim that cloud computing is more power efficient and therefore more environmental friendly.

To tease readers to continue following this series of articles, examine the following chart.

Figure 1 (above) shows that as the number of file transfers between the desktop and the cloud increases, the percentage of total power consumed in the transfer process increases. Says the report, “For a private cloud storage service, at a download rates above one download per hour, servers consume 35%, storage consumes less than 7%, and the remaining 58% of total power is consumed in transport [Emphasis added.] These results suggest that transport dominates total power consumption at high usage levels for public and private cloud storage services.

The energy consumed in transporting data between users and the cloud is therefore an important consideration when designing an energy efficient cloud storage service. Energy consumption in servers is also an important consideration at high usage levels. The percentage of total power consumed in servers is greater in private cloud computing than that in public cloud computing. In both public and private cloud storage services, the energy consumption of storage hardware is a small percentage of total power consumption at medium and high usage levels. [Emphasis added.] In other words, for applications where large amounts of data must move between desktop and cloud, more power is required.

Where to store the data?

Before continuing, let’s ask why wouldn’t a production facility just decide to store all their data (video) on site? After all, in-house is safe, accessible and controllable. But, cloud proponentssay cloud storage is cheaper. Maybe not. Despite the dropping costs of MB/square mm of platter, servers remain expensive for numerous reasons.

Storage analyst Fang Zhang HIS predicts “Maximum areal densities in hard disk drives (HDD) are expected to more than double during the five-year period from 2011 to 2016… HDD areal densities measuring data-storage capacities are projected to climb to a maximum 1,800 Gigabits (Gb) per square inch per platter by 2016, up from 744 Gb per square inch in 2011…”

Storage will become less expensive per GB, but other environmental and workflow issues remain. So realize that media storage cost calculations should involve more than just what it costs to buy some hard disks. There is the cost of the raw storage, then the installation and maintenance. Finally, there’s the cost of cooling.

All this fog means that real storage costs are difficult to calculate. While the stats promoted by Google sound impressive, Tom Raftery, writer of the Green Monk energy blog, notes a few holes in the above claims.

Raftery points out that anyone replacing legacy servers with newer technology would see similar performance improvements. Second, he urges engineers to consider also the cradle-to-cradle factors in server manufacturing. Manufacturing creates its own set of carbon emissions so just plugging in a newer super-efficient server is not zero Co2. And, don’t forget the Co2 costs in building and operating an Exabyte-sized storage facility.

As Raftery notes in the Table 2 below, that despite Google’s claim to be zero net emissions since 2007, Google’s new GSA server farm is less Co2 efficient than the old GSA facility.

The bottom line is that there are many factors to consider before jumping into the cloud. As anyone who’s actually flown through a cloud knows, the ride is often bumpy.