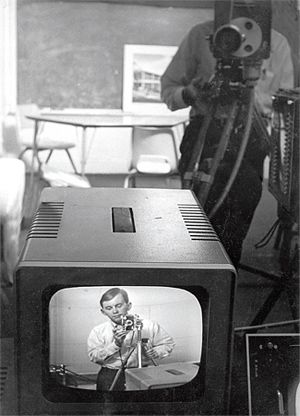 James E. O'Neal is the Technology Editor of TV Technology.

It doesn't seem that long ago since I was hefting reels of two-inch tape up onto an "Allenized" Ampex VR-1000, or balancing the encoder connected to a monster General Electric flying spot color film chain. However, the calendar and clock say otherwise. That was in 1969, my first year of full-time employment in the field of television engineering.

The author, as a 20-year-old, basks in the glory of finally succeeding in getting a couple of Sarkes Tarzian studio cameras—driven by a Dage sync generator—up and running. The results are displayed on a Conrac monitor. Does any of this gear still survive? A couple of years earlier, I'd gotten my feet wet in setting up a small video studio for one of the colleges at my university. It was comprised of cast-off gear from an early attempt at CATV local origination—a couple of Sarkes Tarzian first-generation vidicon cameras driven by a Dage "industrial" sync generator. I still remember the nights I spent in trying to get the Dage and its boatload of twin-triodes to "count" properly and deliver the signals I needed for the cameras.

Where am I going with this?

Well, if you're a regular reader, you must have some interest in the technical side of television. And if you're been around long enough to remember when there were no big box stores selling video cameras and recorders, you've probably spent a fair amount of time installing, repairing, or operating some of the first- or second-generation video broadcast gear that filled control and equipment rooms at every television station.

Regardless of the nervous tension and the occasional all-nighter needed to get a problematic piece of gear ready for air, I think most of my generation of video people have to admit that things were more "fun" before auto-setup buttons started appearing on cameras and tapes still had to be mounted and laced up on half-ton VTRs.

Progress is inevitable in any field and that's why museums came into being—to serve as a repository for what was once the latest and greatest, but sooner or later amounted to an out-of-style object or obsolete technology, and to show these artifacts off to later generations.

The odd thing is that most of the big "mainstream" museums don't do much with broadcasting artifacts, in spite of the fact that broadcasting, in one form of another, touches virtually every man, woman, and child on the planet on a daily basis. Cars, airplanes, trains, clothing, and dinosaur bones are all well represented, but when's the last time you saw anything other than, say an odd microphone or perhaps a portable radio?

I'm glad to say that a number of smaller museums have stepped up to the plate to try and save, restore, and make available for posterity some of the broadcasting artifacts that otherwise would be part of landfills or recycling programs.

I've spent quite a bit of my time visiting a number of these museums and have located others via the Internet. Some are truly "lights hidden under the bushel" and have inspired me to prepare an article on broadcast museums, the first part of which appears on p. 26 in this issue. The unfortunate part is that I've likely missed some collections and institutions that are also worth of recognition. I apologize to any organization I may have inadvertently omitted. All individuals and groups responsible for rescuing the machines and instruments that once kept television operations in business are to be commended. We need these keepers of the past to remind us how we got to the present.

So what can you do to help perpetuate such institutions?