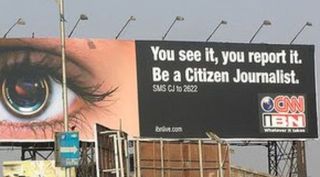 Like it did for virtually all of us, Hurricane Sandy's onslaught dominated both my television and social media timeline. Some breathtaking images were real. Some were not. All of them were part of the conversation.

The best images, for my money, came from citizens.

That said, on the broader level, let's establish right now that it doesn't matter where your personal feelings reside concerning citizen journalism.

You can rail against it on an ideological level, as Ron Steinman did in 2009. You can casually dismiss it as amateurish at its base or, at times, disingenuous in its "I'll make you a star" approach. Or, you can nod to its results — including sometimes being the only voice — that have produced some of the most stunning accounts, videos and images in history. (Along with Sandy and Syria, the Egypt demonstrations come to mind pretty quickly.)

Whatever your attitude, the concept remains relevant... and critical. Technology has ensured citizen journalism is here until the common person is forced to hand over his or her smart phone, and social media is locked away forever in solitary confinement.

Good luck with that.

Everybody has a phone. Everybody can shoot video. Some even do it well. Tools for capturing the world continue to become more widespread, and it continues to shape how we view "coverage." It was a Nike campaign tagline meant for NBA star LeBron James, but the message fits perfectly here: "We are all witnesses." It's just now some have taken that next much bigger step from simply showing or telling only their friends what they saw.

But, as broadcasters, if we're going as far as actively calling for citizens to be reporters, does it then also become our responsibility to shepherd it? Or, does it go no farther than only finding new ways to secure footage that your competitor won't have. Is that somewhat reckless?

Overall, the industry obviously sees value and has a vested interest in street reporting. New products designed to encourage viewer involvement appear almost daily. Stalwart operations like The Weather Channel have made viewer videos a regular part of broadcasts for so long I don't remember them not being involved. Even YouTube has evolved into a news video source.

All of things have certainly influenced broadcast engineers' workflows and infrastructure decisions. As engineers, when videos of an event such as Sandy occur, what avenues do you take in securing viewer content?

Also, what benefits have you seen from citizen journalism's contributions? What challenges have you faced in trying to get consumer-generated video to air?

Finally, where does the relationship between citizen journalism and our industry go moving forward?