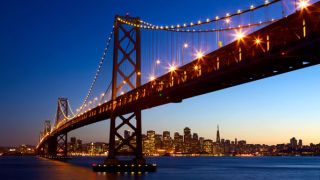 Day two of the 2012 AES convention was much like day one. It was far too nice to be couped up inside a convention center exhibition floor or in a seminar room. But, duty calls.

Back to business, I’ll call this AES show the year for new microphones. Andrew Kornstein, market development, house of worship reviewed for me the new KK204/205 series of microphones. Designed to partner well with the Sennheiser 2000 wireless transmitters, the mics are based on the familiar Neumann wired mics, KMS 104 and KMS 105.

The KK204 has a cardioid pattern and the KK205 provides a supercardioid pattern. Both microphones offer what the company calls “single polar pattern design”, providing uniform pattern response over the mic's entire frequency range. If feedback is a problem in your gigs, this series of mics may be your answer.

On the other hand, perhaps your duties include recording orchestras. Sennheiser has a solution here too. It’s the MKH 8090 RF condenser microphone, which provides a wide cardioid pick-up pattern making it idea for that next classical assignment.

It is also well suited as both a main and a spot microphone. An optional screw-on module can be used to convert it into a digital AES42 microphone.

Like Broadcast engineering magazine, Sennheister also believes in providing training for future users. When asked was the most underestimated power of filmaking, filmmaker Geert Verdickt said, "That would be sound."

To remedy this situation, the multi-award-winning video journalist has joined forces with Sennheiser to develop a series of tutorial videos dedicated to the subject of audio for video filmmakers. In a total of five episodes, Verdickt shows ambitious filmmakers how to record perfect sound for their videos, and does it in a way that is both professional and entertaining. New tutorials will be uploaded to www.sennheiserusa.com/audioforvideo every two weeks through November 14. Hey guys and gals, here's a seminar that may provide a path to better sound for your video--and it's free.

Are all the new rules regarding loudness giving you a headache? Check STAGETEC’s new loudness metering feature for the NEXUS-based AURUS and CRESCENDO audio consoles. The feature allows the console to export loudness values for long term logging and creating a legal audit trail.

Each NEXUS Base Device can provide simultaneous and independent metering for three audio programs with up to eight channels each. The software includes loudness metering in accordance with the American ATSC RP A/85 as well as with the international ITU and European EBU recommendations.

Fairlight is demonstrating several audio post systems in their booth. The first is Xstream, an integrated tactile editing interface. It supports up to 192 tracks feeding a 230-channel mix into 72 bus elements. These bus elements can be combined into any number of outputs, from mono to 7.1 or even custom bus elements of any size.

All channels and buses are equipped with 6 bands of EQ plus compressor, gate/expander and limiter. The Xstream provides single or dual video tracks and supports common SD and HD standards.

For audio recording, both New (Overlay) and Tape (Insert) recordings modes are available at any time, which enable the user to work in the style they prefer.

With flexible patching and routing as standard, recording sources is as simple as patch, arm and record. While recording, screen waveforms confirm that the data has been captured correctly.

The XStreamcontroller is a new addition to the Fairlight Product range. It complements the existing Xynergi, but is more compact with a reduced number of controls and even better, a reduced price point.

The controller is built on the new iCan(Integrate & Control Application over Network) technology which Fairlight introduced in its Version 4.1 platform release. This new infrastructure allows for easy or extensive modification of the layout of the functions on the keys. The iCantechnology also allows for the controller to be used with other applications.

The essence of the controller is that it is ‘application aware’, which means it knows what mode the operator is in (recording, editing, mixing, set‐up) and instantly presents the function choices relevant to that mode while hiding those that aren’t.

For example, if operating in edit mode, all the non‐editing options are hidden as these aren’t needed. That means the controller can spread all of its editing functions across the available switches giving its operator true ‘knob‐per‐function’ control.

“The KSM9HS gives sound engineers more options to adapt to different stage conditions or the microphone techniques of a particular performer,” says Chad Wiggins, Category Director, Wired Products at Shure. “The hypercardioid pattern setting provides tremendous rejection of off-axis sound in high-SPL situations, which isolates the voice from monitor bleed even better than a supercardioid.”

In contrast, the KSM9HS’ subcardioid pattern is beneficial where bleed and volume are not an issue. “The subcardioid pattern has a wider pickup angle than a standard cardioid, which is useful on quieter stages,” says Wiggins. “In those situations, stage ambience can enhance the sonic palette.”

The KSM9HS is available in wired and wireless versions. The original KSM9, which debuted in 2005, will continue to be available with switchable cardioid and supercardioid polar patterns. Both the KSM9 and KSM9HS feature a groundbreaking dual-diaphragm design that delivers the transparency of a studio microphone, and minimizes proximity effect for more consistent sound quality at different working distances.

In case you missed it, Shure recently announced fall rebates for a range of microphones and wireless systems. Included are; SM57 and SM58 microphones, DMK 57-52, PGX Digital Wireless system, PGX Wireless system, and Performance Gear. Equipment purchased between October 1, 2012, and December 31, 2012, are eligible for the rebates. Also included in the promotion is Shure’s X2U XLR-to-USB signal adapter bundles, available with the SM57 or SM58.

For more information on Shure’s fall promotion and how to take advantage of the current rebates, please visit www.shure.com/rebates.

Shure also offers a full line of both analog and digital wireless systems. After about 30 minutes of demo, my head was spinning with all the options. "Not a problem", says Shure's Mike Lohman, markeitng director.

The company has developed a brief YouTube video showing the ULX-D High Density Mode Feature in use. Chris Lyons explains how High Density mode, available in the Shure ULX-D Digital Wireless System, allows up to 47 systems to operate in just 6 MHz of spectrum, with a working range of 100 fee. Check it out here.

Gepco’s Chris Gazdic, associate engineer for broadcast, professional and commercial A/V products tells me there’s an increasing demand for powered cables. Gepco calls this new line of cable, RunONE. Installation time is reduced when both power and signal are contained on one cable. In this product, each cable combines power with two, eight or 12 channels of 110-Ohm balanced audio for either mic or line level or digital AES signals an can be used to drive self-powered speakers.

Other configurations include two channels of Cat 5e cable usable for data drops or digital audio transmission for remote power and audio applications. The cables are shielded around the power channels which eliminates power noise.

For those applications where you just need to feed self-powered speakers, Gepco provides RunONE cables that combine a NEMA 5-15 power plug on one end and a powerCON socket at the other end. The cable can be purchased with dual XLR M/F 3 or 4-pin connectors, or one TRS/XLR combination.

For readers not familiar with the company, OPTOCORE provides an open platform, which is able to transparently send MADI, AES/EBU, Ethernet and Serial data such as DMX, MIDI, RS485/422 and CAN BUS seamlessly through a fiber network. These guys have worked all the big shows and live events.

The solution is open and the equipment easily interfaces with many different manufacturers . Bill Coons, director, assured me that OPTOCORE devices are fully compatible with all consoles and pro-audio devices. Current technical partners include: AVID, DiGiCo, Lawo, Soundcraft, Studer, SSL, Neumann, Clear-Com, RTS Telex, Yamaha and many others.

The company’s R” series fiber devices are energy efficient and can reducing power consumption up to 40%. ”R” Series devices provide 100% more fiber bandwidth by offering 2GBits of bandwidth , providing for an astonishing 1024 input channels per ring plus unlimited number of output channels. This means single as well as stacked rings have even more capacity

The OPTOCORE system uses synchronous transmission transporting an extremely low-jitter Word Clock together with audio and video. Latency is extremely low – 41,6 μs, this value is fixed regardless of bandwidth and number of devices in the network.

Coons had a video display showing some of the high-level events the company has supported. In summary, If the broadcast or live show had a million viewers—it probably had his gear somewhere in the mix.