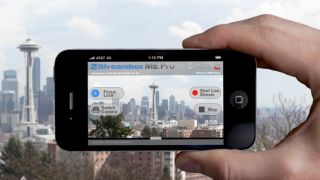 Whether it’s smartphones or traditional ENG cameras, broadcast news reporters are rapidly adopting bonded cellular devices and consumer-level products to gather the news and get closer to the event.

NHK (Japan Broadcasting Corporation), the national broadcaster, is now outfitting more than 500 journalists and producers with a new app from Streambox that allows those in the field to leverage public 3G and 4G networks to send video back to the studio. As part of the deal, NHK has acquired 500 licenses for the StreamboxME Pro app so that its reporters, in Japan and throughout the world, can capture and transmit live video from breaking news stories using their iPhones and Android devices.

The broadcaster has also deployed Streambox Enterprise Server to handle a large volume of simultaneous live video streams and uploads from hundreds of reporters and contributors at a time.

The software-based StreamboxME Pro encoder can be downloaded from iTunes or the Android marketplace and allows users to capture live content from their app and stream high-quality video back to the studio. The app features the ability to bond multiple 4G/LTE and Wi-Fi signals (for reliability), or it can be used on Inmarsat BGAN bandwidth. A reporter simply opens the StreamboxME Pro app on his or her phone, selects a preset (i.e. talking head, reliable, custom) and then can begin streaming live video.

The software upgrade will integrate LiveU’s portable bonded cellular device with the Panasonic broadcast equipment to create an integrated solution for delivering live video back to the studio over cellular and wireless networks.

This upgrade will allow the uplink “start-and-stop” functions to be controlled from the AG-HPX600 camera and the LU40 status to be displayed on the camera’s viewfinder. This will allow camera operators to control live broadcast feeds.

An optional upgrade system has been introduced in Panasonic’s AG-HPX600 P2 camera recorder.

Panasonic said that the LiveU collaboration was part of a larger effort to “strengthen its partnerships with various companies providing uplink solutions to offer customers new ways of operation based on the P2 camera recorders’ network capability.”