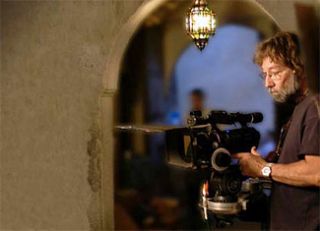 Current assignments:
In France, I’ve been shooting some new spots for Luxe TV UK… all shot with Canon EOS 5Ds & 7Ds. In Eastern Europe, mainly shooting commercials in Romania and Ukraine in 35mm. And a feature film in Morocco: HDV to 35mm – my first experience with digital. Shot on two Sony Z1s, blown up to a 35mm answer print. Looks good!

Have you been busy?
Very, as I’ve also been restoring our 17th century farmhouse between jobs – a great pleasure and a very satisfying enterprise with a steep learning curve.

Shooting where?
Paris, Nîmes, Monaco, Cannes, Morocco, Romania, Ukraine… I’ve shot in a lot of places all around the world at one point or another. But there are a lot of places I’ve never shot, let alone been to: Russia, Chile, and New Zealand come to mind, as well as Papua New Guinea, where I always wanted to dive around Port Moresby.

What types of productions have you mostly shot?
I started producing music videos in the 80s. Eventually I shot a video myself that was seen by a Hong Kong production team setting up a feature film in London and HK. I was offered the film and jumped at the chance. That brought in another HK feature film and commercials.

You shoot underwater: what sort of kit do you use?
Hydroflex and custom made housings for Arri 3’s but I’ve not shot U/W for some time. However, the new Canon cameras would be a joy to shoot with underwater. Using a Normandy base, what are the pluses and minuses? Good quality of life begins where stress finishes. Waking up in the morning in the quiet countryside of Normandy cannot be beaten; as far as I’m concerned, miles of empty beaches and having hardly any traffic around makes for a real break from filmmaking.

What was your first shooting job?
A TV programme about the yearly Farmers’ Expo at Earl’s Court in London shot for ITV on 16mm. The cameraman became sick and they called me in. On that day the Queen Mother inadvertently took me to be someone she was supposed to meet, so she shook my hand. Then I had to shake the hands of all the entourage that followed, which I found rather funny. The director thought I had stolen the limelight – some people have no sense of humour!

I got a job as location scout for the Club Tropicana video for Wham from a producer who knew I spoke Spanish. The production team was over keen to get to Ibiza where we were to shoot, and left London without checking in the camera equipment. On the flight we got a call from Samuelson’s in London asking where the camera gear was supposed to go to, as it was still sitting in their depot!

From doing a scout I ended up taking over production, location managing, and acted as focus puller… all this led me to continue producing jobs for the production company.

Most recent, interesting assignments?
Three Orbit commercials in one day in a Ukrainian studio w/o pre-light.

Started at 08:00. The production company had hired in a Movicam because of cost. Soon we discovered the Arri swing and tilt lenses did not fit so had to get an Arri 535 at the last moment. Thank God it was the weekend so it was available. We waited for the camera all morning, which gave me time to pre-light. Started shooting at around 12:30pm and shot straight till 12:30am, turning around and lighting three different angles of the same set, one for each commercial. The director and I were back at the hotel bar by 2am that morning.

Best thing about your job?
The people you get to work with and meet in each assignment. Some great technicians, always dedicated, each with their different stories and approaches to excellence. It ends up being like a family away from the family and it truly makes our work the pleasure it is. Nothing is more satisfying than travelling around the world with a team you know well to attack a new project, in new surroundings. All is new, fresh, exciting. Work hard and party harder.

Worst thing about your job?
Sometimes I have to work with people with no sense of humour, and an enormous ego – I call them ‘mushroom heads’. The job gets done but certainly not to its best potential.

Dullest assignments and why?
Toy commercials. Small sets to light, in tiny cramped studios, usually motion control studios and very, very hot because of the depth of field needed. Not the best job to do but even these can be fun.

Hairiest/scariest assignments and why?
While filming the end shot of a music video in Miami we were hovering in a helicopter next to a 15 storey building ready to shoot, when over the radio came the news that the artist did not want to come out to the balcony as he was unhappy with his hair and wanted to have a haircut; that was pretty hairy! In the end a haircut was done, so we had to reshoot two days’ work.

Another time we shot a music video in Japan where we had storyboarded shots of the bullet train with Mount Fuji in the background. All was well until we arrived to scout Mount Fuji and were told that one can only see Mount Fuji in spring and Autumn, as it’s mostly foggy the rest of the year! No one had bothered to tell us during prep. Luckily, the shots did not involve the band so we shot them locked off to put Mount Fuji in later from a still.

How much 16:9 do you shoot?
About all of my work is 16:9 nowadays. I shot a commercial in Romania where they insisted on 1:33. We couldn’t believe it, but then most of their TV sets were still in that format. It was like living and shooting for the middle ages…

What country would you most like to shoot in?
Chile, as it is such a long country it must have all kind of amazing locations and I have always admired the Araucanos, fierce Indians from south Chile.